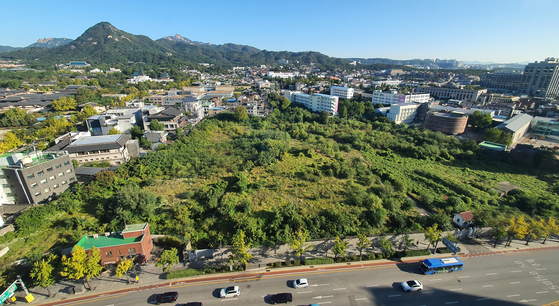 
The Seoul Metropolitan Government has designated a large plot of land owned by Korean Air in the center of Seoul as a public park.

On Wednesday, the city government announced it would designate the Songhyeon-dong, central Seoul, site as a public park, changing it from the current “special-purpose complex.”

The redesignation will not come into effect until the Anti‑Corruption and Civil Rights Commission (ACRC) comes up with an arbitration plan between the city government and Korean Air, which opposes the designation. The procedure was initiated upon Korean Air’s request in August after Seoul City first proposed turning the land into a park for public use.

Covering nine acres, the piece of land in Songhyeon-dong is located right next to Gyeongbok Palace. The company purchased it from Samsung Life Insurance in 2008 and had planned to develop a cultural complex.

After years of failing to proceed with the project due to construction regulations in one of Seoul’s most preserved neighborhoods, the company announced that it would sell the plot of land along with other non-core property assets in February this year. It was part of a grand plan to secure funds amid a management crisis caused by the Covid-19 pandemic.

Now that the site faces a future as a public park, it’s unlikely that Korea Air will be able to sell it for the high price it was looking for.

Instead of acquiring the land directly from Korean Air, the Seoul Metropolitan Government announced Wednesday that it would pull the state-owned Korea Land and Housing Corporation (LH) into the deal. LH would purchase the land from Korean Air first and Seoul would then trade another piece of land with LH for the former Korean Air plot.

Seoul had initially planned to pay Korean Air in increments until 2022, but the carrier rejected the proposal. The company had already received emergency funding of 1.2 trillion won ($1 billion) from its creditors in April and was in need of immediate funds.

“We concluded that pushing through procedures for the purchase of Songhyeon-dong land would accelerate payment — that would also benefit Korean Air going through financial difficulties,” said Kim Hak-jin, Seoul Metropolitan Government’s deputy mayor in a Wednesday press briefing.

LH, on the other hand, made it clear that its participation is not yet decided.

“We did receive a request from Seoul city last month to cooperate in purchasing the land for a public cause. But at the moment, the matter is still under examination. There is no agreement made with Seoul city,” LH said in a Wednesday statement.

Compared to its previous statements, Korean Air was relatively quiet after the Wednesday announcement, simply saying it is “waiting for the ACRC’s decision and will continue actively partaking in discussions with Seoul city and relevant organizations.”

It is not clear how much Korean Air will receive in return. Seoul had formerly said the land may be worth around 467 billion won —  much lower than the reported market estimate of over 500 billion won. However, Kim told reporters Wednesday that it would require an official property appraisal and further discussions to finalize the specific amount.