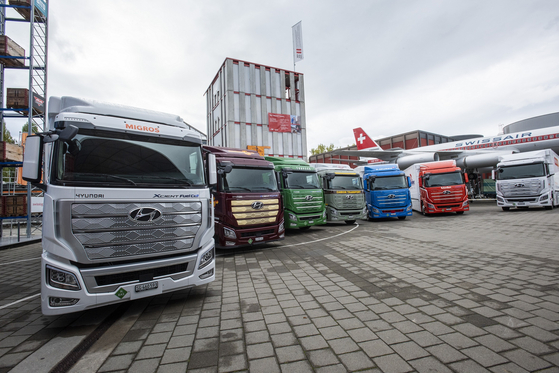 Seven units of Hyundai Motor's Xcient Fuel Cell that were exported to Switzerland are parked in front of the Swiss Museum of Transport in Luzern on Oct. 7. [HYUNDAI MOTOR]


Hyundai Motor delivered its first batch of hydrogen-powered trucks to its clients in Switzerland on Oct. 7, vying to play a pioneering role in Europe's eco-friendly commercial truck market.

The carmaker said it delivered seven units of its Xcient Fuel Cell to its clients in Switzerland, including supermarket chains Coop and Migros and logistics companies Travego, Galiker and Camion.

Its European clients will use the truck based on a pay-per-use system in which they don't purchase the vehicle but pay for the distance they drove with the car. The fee will include costs for charging, repair, insurance and regular checkups, according to the carmaker.

Such payment systems have been selected to offer financial advantages to potential clients in order to expand the fledgling hydrogen truck industry, according to the carmaker.

Earlier this year, Hyundai Motor exported 10 units of Xcient Fuel Cell trucks, the world's first mass-produced heavy-duty trucks that run on hydrogen, to Switzerland from its Jeonju plant in North Jeolla. The 34-ton cargo truck is powered by a 190-kilowatt hydrogen fuel-cell system and can drive up to 400 kilometers (249 miles) on a single charge. Charging takes eight to 20 minutes to complete. 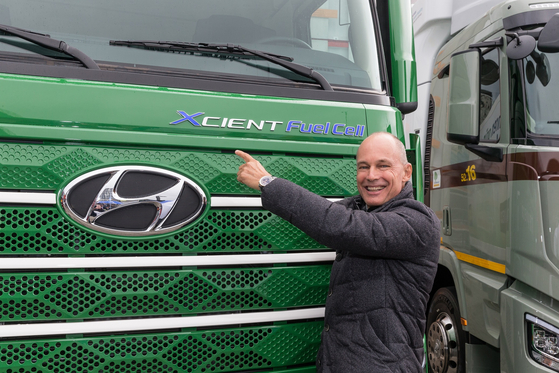 A staff from Travego poses in front of the Xcient Fuel Cell on Oct. 7. [HYUNDAI MOTOR]


The remaining three units will be delivered by the end of October, the carmaker said.

It also said it plans to deliver 30 additional units to Switzerland by the end of this year.

Starting with Switzerland, Hyundai Motor plans to export its fuel-cell trucks to Germany, Norway, the Netherlands and Austria, with the goal of exporting a total of 1,600 units by 2025 and 25,000 units by 2030.

In accordance with such an ambitious plan, the carmaker said it will invest in its facilities to secure the capacity to produce at least 2,000 units of hydrogen-powered trucks per year by 2021.

Following Europe, Hyundai Motor plans to enter the U.S. hydrogen truck market in 2022 with a pilot program starting in California next year.

Hyundai Motor is currently the only carmaker producing hydrogen-powered trucks. Phoenix-based Nikola, a start-up dedicated to fuel-cell trucks which quickly rose as the Korean carmaker's competitor, is facing fraud allegations regarding the novelty of its technology. Toyota is also another strong competitor but doesn't have a product ready for the market yet.