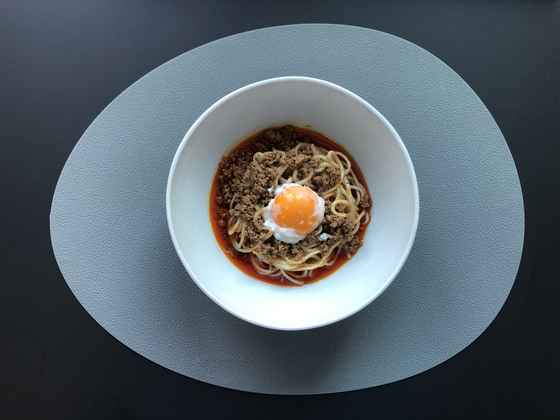 
Chinese-style dan dan noodles are probably not a regular on your dining table, but they should be.

The culinary talent who gained public recognition thanks to his appearances on a variety of cooking and entertainment shows including “Please Take Care of My Refrigerator” in 2015 opened his casual noodle spot in Mount Namsan after he closed his other spot Bistro Chaugi.

Ever since opening, queues of people waiting for a chance to try his food are commonplace outside the restaurant.

Thanks to the popularity of the restaurant located in Hoehyeon-dong, central Seoul, Chung opened a second spot under the same name in Sinsa-dong, southern Seoul, to save those living in the southern Seoul area the trek across the city for a bowl of noodles.

For customers who'd rather not leave their homes at all, Chung is now offering his noodles frozen in the box, an easy option for home chefs to whip up their own bowls of dan dan noodles.

This is no basic meal kit. It comes with a total of five separate packages, but the little extra effort pays off as the end result is just as good as what's served after a wait in line outside the restaurant.

The sauce and the beef are supposed to be boiled first in their unopened packages for one minute. While they are boiling, prepare another pot of boiling water to cook the noodles, which takes about two minutes.

To make your dish more flavorful, you can add a poached egg or some finely chopped green onions.

The yolk of the poached egg adds a creaminess to the dish when mixed in with the noodles.

To cook a perfectly runny poached egg, bring water to a boil in a pot and then turn off the heat. Add your egg and keep it in the water for about 12 to 15 minutes.

To make the most of any remaining sauce you may have, the package recommends you have a bowl of rice at hand to mix with your leftovers and enjoy.