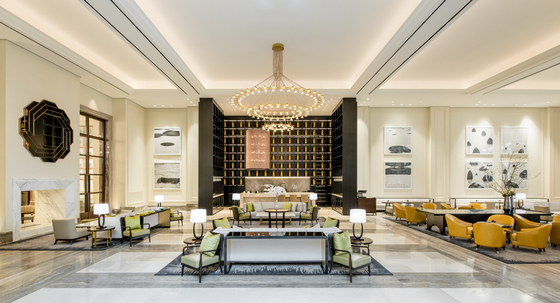 The lobby lounge of Paradise City in Incheon. [PARADISE CITY]


HanaTour is joining hands with Asiana Airlines to offer those who miss traveling on planes some air time.


The duo have devised programs where customers can board a plane, fly for a few hours and then return to the airport from which they originally departed from.

While some people cite flying as their least favorite part of travel, others are desperate to take off as evident from the fact that the tickets for such experiences sold out within days of becoming available.

Making the deal even more attractive is how aircraft passengers get to take their flight in the luxurious A380 aircraft, which is advertised as a flying luxury hotel in the sky.

This make of aircraft is usually reserved for long-haul flights on popular routes such as Seoul to Los Angeles, New York or Paris, meaning those who have only traveled closer afield probably have not had the opportunity to experience all the A380 has to offer.

But now with this new experience, passengers can see for themselves what's inside the cabin of this flying hotel, and for a ticket cheaper than a return to Paris.

The programs on offer will take passengers on a flight around the Korean Peninsula. The journey lasts about two hours and 20 minutes after departure from Incheon International Airport. Economy tickets are priced at 205,000 won ($178) while seats in business class start from 255,000 won. The most expensive ticket costs 305,000 won.

Passengers will take to the skies above cities like Gangneung in Gangwon, Pohang and Gimhae in Gyeongsang provinces as well as Jeju Island and be able to enjoy aerial views of the peninsula. 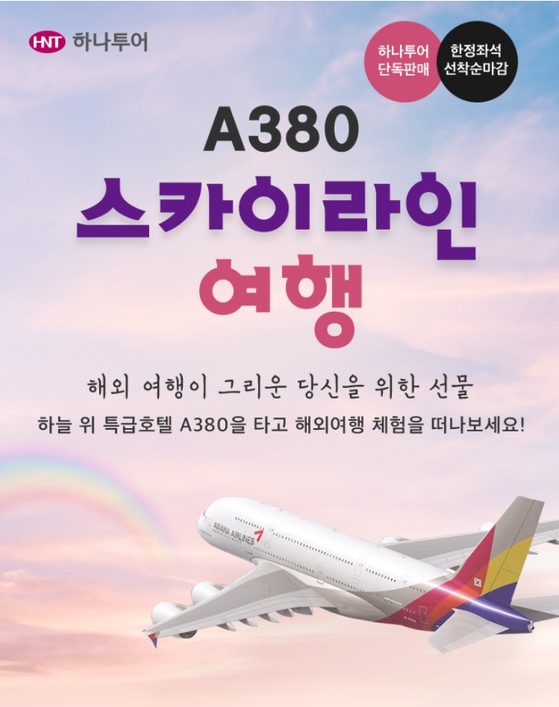 A poster, featuring the A380 by HanaTour, promotes Hana Tour's no-landing flight around Korea. [HANA TOUR]


While many may scoff at this trip to nowhere, for others it's a chance to experience the life of a business class jet-setter.

“Getting on an A380 might have not been an easy thing to do even for avid international travelers,” said the communications representative for HanaTour, citing this as part of the reason that all 284 tickets are sold out.

“Customers seem to be attracted to having an experience on a plane that they have never been on before."

The flights are available for two days on Oct. 24 and 25. Each ticket includes an in-flight meal, travel kit, a voucher that offers a 50 percent discount on their next domestic flight as well as some discount coupons for in-flight shopping.

To complete the "vacation" experience, customers can pay as little as 74,500 won per person to stay in a luxurious hotel close to Incheon Airport. Nest Hotel and Paradise City are participating in the programs to offer the flight passengers a chance to check in after their short-haul journey.

The attempt to create an overseas vacation experience doesn't stop there.

HanaTour also teamed up with the Singapore Tourism Board and the Marianas Visitors Authority to make Oct. 24 Singapore Day and Oct. 25 Saipan Day. Travelers will be exposed to lots of information about their faux destinations by being surrounded by panels, photos, travel books and more.

Those that choose to stay overnight at the participating hotels will be offered breakfast featuring cuisine inspired by either Singapore or Saipan.

Air Busan is also preparing a similar program for Oct. 30. A two-hour course on Air Busan's latest addition to its fleet, the A321LR, will go on sale next week. This flight will depart from Busan and fly over Gangwon province, Seoul and Jeju before retuning back to the port city. The airline anticipates that many avid aircraft enthusiasts will jump at the chance to see the new A321LR up close and personal.

Due to the popularity of such journeys to nowhere, the Ministry of Land and Transportation is reportedly reviewing whether those who take no-landing trips can avail of duty-free shopping at the airport. At the moment, such travelers can only purchase items via the in-flight shop offered by the airline.

The uptick in programs on offer was spurred by a flight from Taiwan to Jeju Island last month, which offered a round-trip journey without touching down anywhere on Korean soil. The 120 tickets sold within a few minutes of being released.

A recent survey conducted by the Seoul city government and the Seoul Tourism Organization showed just how thirsty people are for international travel. A total of 48 Seoulites were interviewed and asked what they were most looking forward to doing after the pandemic subsides. Traveling overseas was the most popular response, followed by doing hobbies and gathering with friends.

For those missing out on the sights and scenes of new destinations, WindowSwap is a website that offers users views from windows located all across the globe. Locations include well-known cosmopolitan cities such as New York and London, as well as lesser know spots like Juja in Kenya and Agartala in India.

Nomadic Ambience, a YouTube channel, offers videos of street scenes from cities across the globe along with ambient sounds like city soundscapes, cafes, waterfalls, rain, thunderstorms, wind and more.