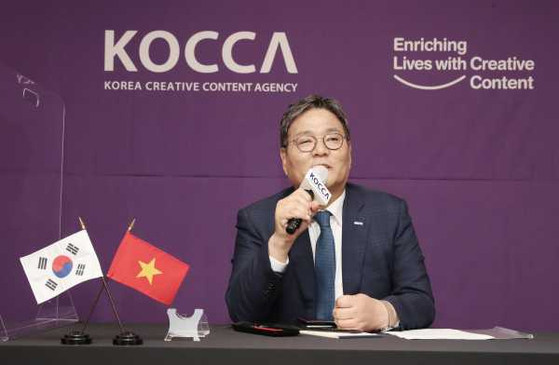 Kim Young-jun, president of Kocca, takes part in the press conference for the opening of the Vietnam Business Center via an online video call. [KOCCA]

Kim Young-jun, president of Kocca, who attended the conference via a live video call, emphasized the importance of cooperative interaction between the two cultures, and the new business center's role in achieving an enhanced level of cultural exchanges between Vietnam and Korea.

"The term 'New Hallyu' embodies the hopes of spreading Hallyu not through a one-sided launch [into the Vietnamese market], but a cooperative interaction based on communication and empathy," said Kim.

"The Vietnam Business Center will not only support the launch of Korean content companies in Vietnam, but also that of Vietnamese companies in the Korean market. We especially aim to support collaborations or joint [content] production projects between the two countries' companies." 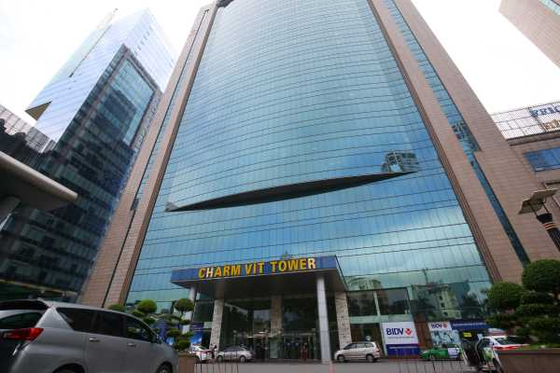 The Vietnam Business Center will be located on the 10th floor of the Charm Vit Tower in Hanoi, Vietnam, which is also occupied by Korea's major state-run institutions such as Kotra and the Korea Tourism Organization. [KOCCA]


Similar to the Korea Culture Center or the Sejong Institute — which are both run by the Ministry of Culture, Sports and Tourism to promote Korean content overseas —, the new business center will focus on business partnerships and the launch of content creators and companies, while also keeping its goal of spreading Hallyu.

The business center will launch various collaborations between the two countries to promote the symbiotic growth of content creators from both companies, such as running business projects, forming task forces, analyzing market data and nurturing new talent.

"Kocca will lead the way to growing together along with related industries by spreading New Hallyu through our overseas business centers," said Kim.