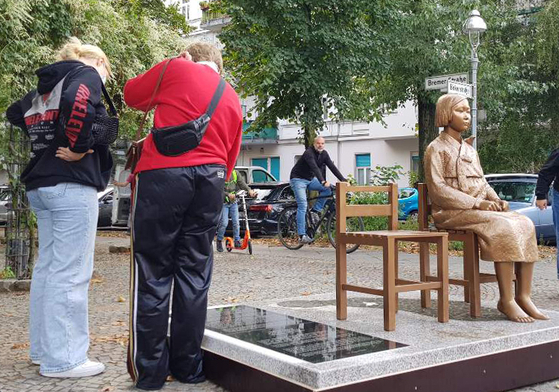 
Korea voiced criticism Thursday over Japan's call for the removal of a statue erected in Germany of a girl symbolizing Korean victims of wartime sexual slavery, calling it an act that goes against the spirit of its own apology.

Last week, Tokyo expressed regret over the recent installation of the statue on a public site near the Japanese Embassy in Berlin. The statue was erected by Korea Verband, a Berlin-based civic group with South Korean ties.

The issue drew attention as Japanese Foreign Minister Toshimitsu Motegi requested it be removed when he held bilateral talks with his German counterpart, Heiko Maas, in Berlin last week.

"The installation of the statue is a voluntary move by the private sector. It is not desirable for the government to get diplomatically involved," ministry spokesperson Kim In-chul said in a press briefing when asked about the statue.

"The government stepping in to force its removal does not help resolve the problem at all. It also goes against the spirit of the sense of responsibility and self-reflection and apology that Japan has revealed itself."

The government will keep a close eye on the matter and will act accordingly, Kim added.

The installation of the statue comes as the bilateral relations between Seoul and Tokyo remain badly frayed over the issue of compensating Korean forced labor victims and Tokyo's export restrictions on Seoul.

The sexual slavery victims, euphemistically called "comfort women," are one of the many thorny issues stemming from the 1910-45 period when Korea was a Japanese colony.

Historians say that around 200,000 Asian women, mostly Koreans, were forcibly sent to frontline brothels to provide sex services for Japanese soldiers during World War II. In the landmark 1993 Kono Statement of apology, Japan acknowledged for the first time that women were forcibly recruited into sexual slavery.

It is the third comfort women statue installed in Germany and the first to stand in a public place with approval from the Berlin authorities. The other two statues are erected on private properties.