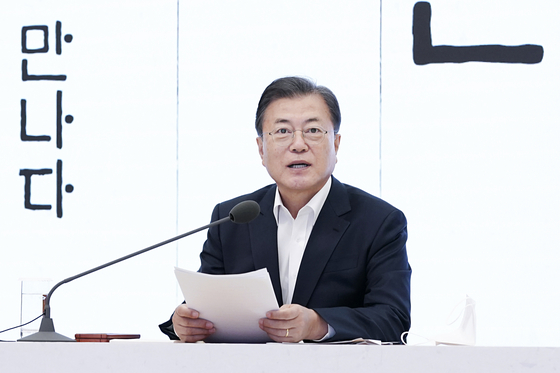 South Korean President Moon Jae-in holds a virtual conference with social workers at the Blue House on Thursday. Moon in a recorded speech released the same day called for support for an end-of-war declaration with Pyongyang. [YONHAP]


South Korean President Moon Jae-in on Thursday echoed an earlier call at the United Nations for a formal declaration to end the 1950-53 Korean War — despite a lack of interest in the idea by other parties like North Korea and the United States.

In a filmed address to the U.S.-based Korea Society for its annual gala, Moon appealed for support for such a declaration, which he affirmed would “not only deter war” and “institutionalize peace,” but also strengthen the South Korea-U.S. alliance.

The speech marked the second time in recent weeks Moon has beaten the drum for an end-of-war declaration, following his video address to the 75th UN General Assembly in New York last month. In that, he declared that such a declaration will “open the door” to complete denuclearization of the Korean Peninsula.

The two Koreas remain in a technical state of war, though hostilities were halted after an armistice agreement was signed between the UN Command, North Korea and China in the summer of 1953.

The idea of transforming the armistice into a peace treaty — and by consequence effectively normalizing diplomatic ties between the two sides — was a centerpiece of Moon’s agreement with North Korean leader Kim Jong-un at their first summit in April 2018.

In that meeting, the first between Korean heads of state in over a decade, the two leaders agreed to begin the process of building a permanent peace settlement with a formal end-of-war declaration within the year.

No such declaration materialized that year — or the next — as denuclearization talks between Pyongyang and Washington petered out, to Seoul’s disappointment.

North Korea made the South the target of its frustration over the stalemate, notably in June with its demolition of the inter-Korean liaison office in Kaesong.

With his peace initiative toward the North now on life support, Moon has apparently put his bets on an end-of-war declaration as a means by which to end the deadlock in diplomacy with the North.

“We can neither allow any backtracking on hard-earned progress nor change our destination,” Moon said in his address, according to an official English translation from Seoul’s presidential office.

“Moreover, our two countries will continue the efforts to build trust with North Korea, one of the parties involved, by keeping our ears, mind and heart open toward it.”

The president’s repeated appeals for a declaration may be linked to the fact that domestic support for his conciliatory policy towards the North is waning, following a series of incidents this year that have soured South Korean confidence in Pyongyang’s interest in peace.

A poll commissioned by local broadcaster MBC released last month, following the North Koreans’ shooting and killing of a South Korean fisheries official on Sept. 22, showed more than half of South Koreans — 53.4 percent — favored a hardline response to Pyongyang over the incident.

By contrast only 43.4 percent favored resolving the issue through talks, results said. The poll, conducted by Korea Research, took place from Sept. 27 to 28 with 1,005 respondents nationwide, with a confidence level of 95 percent and a margin of error of plus or minus 3.1 points.

Sensing the change in public attitude toward the North, the opposition pounced on the speech to slam Moon Thursday. In a statement, the main opposition People Power Party (PPP) said it felt “fear” at the president’s endless obsession with ending the war despite lingering questions about the killing of the fisheries official.

“An end-of-war declaration without denuclearization is just an unanswered echo,” the PPP said. “Instead of making empty noises, this country must first answer what it did when its own citizen was being brutally murdered [by the North].”

Defending Moon’s speech, the Blue House objected to such condemnations by the opposition and several media outlets. “We do not want to be swept up by a time consuming controversy regarding the end-of-war declaration and the peace process,” said a top presidential official.

“I want to ask why [the president] is not allowed to talk about peace.”

But a domestic backlash may not be Moon’s biggest problem in regard to such a declaration.

Though Kim issued a rare apology for the shooting of the South Korean official, the regime has made no response to Seoul’s request for a joint investigation of the matter, much less Moon’s earlier call at the UN for a declaration.