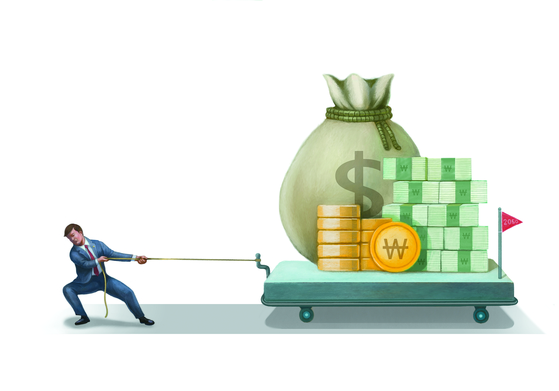 
The widely held aspiration to give more opportunities and wealth to the next generation has been the inspiration and emblem of the South Korean social development. On a national level, fiscal integrity has been the pride and legacy of the past governments.

But the long-standing 40 percent debt cap against Korea’s GDP was challenged under the Moon Jae-in administration. The traditional gate-keepers of state coffers were shaken after President Moon asked, “What is the basis for regarding the 40 percent government debt-to-GDP ratio as a Maginot Line?”

Increased welfare spending triggered a debate on the pace and balance. The pandemic crisis has eroded fiscal restraint. Money poured out everywhere. As businesses closed and took jobs with them, public accounting became the panacea.

The Covid-19 generation will pay for surging debt 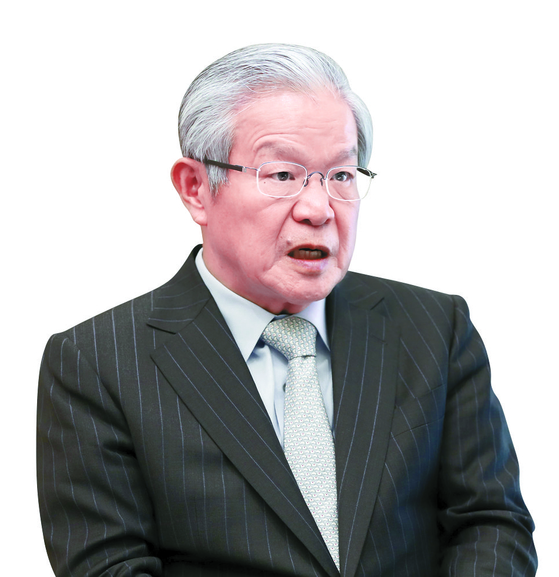 “The Covid-19 generation could become permanent losers. The contemporary generation must stop it,” said Kwon Tae-shin, president of the Korea Economic Research Institute (KERI). Kwon believes people in their 20s would be the first to feel the pinch from today’s spending spree. A KERI survey showed that 55.5 percent of those graduating college this year will be unable to find a job.

“Regulatory and labor reforms do not require big spending. But they stimulate growth in the private sector, and potential growth. In the end, tax revenue and jobs will increase. But policymakers are entirely engrossed in immediate spending,” he said, calling fiscal expansion “irresponsible.” We met him on Sept. 17.

A. Interest rates go up and down. We should be prepared for floods during dry season. An economic policy must be ready to deal with both flood and drought. If money is recklessly spent, we are doomed.

Some people make money through investments after borrowing money. It may not be a problem if the economy can grow beyond the interest rate.

As the government is carefree about debt, individuals also do not fear borrowing money. What’s the use of regulating loans to rein in real estate speculation? The government encouraged people to borrow from banks to invest in homes or stocks. It has made fools out of those who saved whatever they could and refrained from borrowing money from banks.

It is not just Korea. All governments around the world are spending.

Complacency through the belief that Korea’s public finances are relatively better off when compared to other countries is the biggest problem. The comparison itself is wrong. Each economy differs in size and income. When the U.S. government issues bonds in U.S. dollars, institutions and investors around the world buy them. This is because the greenback is a reserve currency. Korea’s is not. Rating agency Fitch warned of downside risks to Korea’s sovereign debt rating if its debt-to-GDP ratio hits 46 percent. If Korea’s sovereign credit falls, foreign capital would pack up and leave, sending interest rates up and battering the corporate balance. We could face yet another financial crisis.

Korea was in a financial crisis in 1997 even when the debt-to-GDP ratio stood at 11.4 percent.

A crisis could hit Korea if 10 to 20 percent of foreign capital leaves. Korea might not have graduated from international bailout and crisis so fast if its debt ratio was higher than that. We must not forget it.

Can a country go bust just because it resorted to issuing debt during hard times?

In the early 1990s, debt financing took up 30 to 40 percent of Japan’s budget. When excluding the fixed expenditures such as on welfare, Japan was able to afford only 10 to 20 percent of its budget to spend for future industries. It is how it ended up being mired in the lost two decades. The indebted generation must share the cost of debt financing from their first salaries. We could end up doing the same to our future generation.

Prices have not gone up because currency circulation has been slower than in the past. But inflation will arrive. Korean companies hoard cash in the face of anticorporate regulations and laws, which is a reason why inflation stays low.

Are there alternatives to address the crisis?

In emergencies, it is best to stick to the manual. Lemming behavior is always foolish and even fatal. Yet we forget each time. I also was a public servant. But a government can be a very inefficient organization. If the government takes up the role of the private sector, it is only a waste of tax money. Tax cuts would be a better option.

The budget did not increase in 1984 due to fiscal deficit. Even defense spending was cut for the first time. Armed generals stormed into the Finance and Planning Ministry. But Moon Hee-gap, then head of the budget office, stood firm. Our public finance system was fought over that fiercely. Otherwise, the government would be leaving debt to the incoming government.

Someone would have to pay. The mindset must change, especially for people in their 20s and 30s, as they could be billed for today’s deficit. Norway saves the money earned from oil production in a sovereign fund to spend in the future. Switzerland voted against basic income.

The state has a duty to expand fiscal intervention 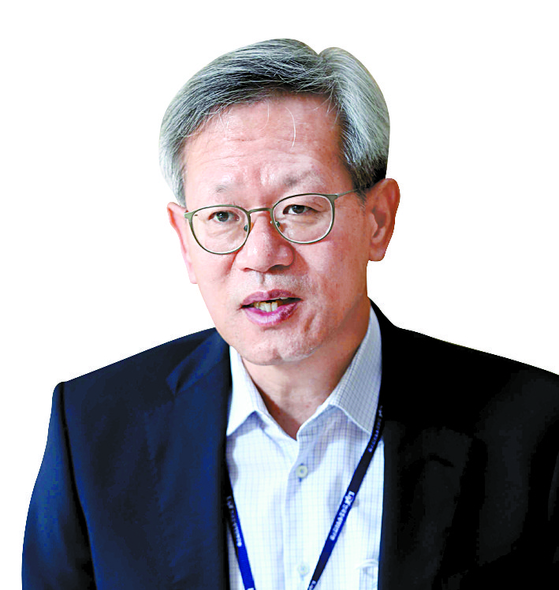 President of the Korea Institute of Public Finance

State-run think tank Korea Institute of Public Finance (KIPF) is tasked with keeping a close watch on public finance. But it has recently turned pro-expansion. Kim Yu-chan, the institute’s president, argued that a aggressive fiscal policies have become a global trend.
“Fiscal policy has become big in the United States and Europe. For long-term growth, the state must play a greater role,” he said. Kim claimed that Korea has in fact been relatively cautious in its expansion. We talked with him on Sept. 23.

Q. Given the growth in spending, how can it be described as cautious?

A. Korea is overly apprehensive about fiscal integrity. Public finance is robust compared to other developed economies. The budget was stretched four times this year, but the increase stopped at 37 trillion won [$32 million], which is 2 percent of GDP. The United States increased its spending by more than 10 percent.

Korea cannot be compared to the United States since it lacks a reserve currency.

The argument for fiscal restraint because Korea does not have an internationally-trading currency is fallacious. All economies have limitations except for two super-big economies, the United States and China. But the debt-to-GDP ratio should not be a big concern if it is contained at a lower level than that of the United States and Japan. The threshold was stretched because of the Covid-19 pandemic.

There is a fear that debt increases could wreck public finance and cause a national crisis.

Japan’s debt overwhelms its GDP by 220 percent. But few think Japan will go under. The bulk, or 90 percent of its debt, is circulated at home. As Japan has overwhelming savings, it is better to issue debt to stimulate consumption and investment and keep the balance in the economy. The zero interest rate also lessens its burden for debt financing. For Japan, issuing debt does more good than harm to the economy.

South Korea does not differ greatly. Foreign holdings make up about 12.5 percent of Korean debt. Most of Korea’s debt is absorbed at home. The ratio is below the Organisation for Economic Cooperation and Development [OECD] average of 37.3 percent. Korea’s debt quality also is not bad.

What happens if interest rates go up?

The United States, which sways the international capital market, has unleashed a great amount of money. It will have to keep rates low for the time being. The benign borrowing condition will continue for some time.

Future generations will have to cover for current decisions. Shouldn’t we save in a sovereign fund like Norway?

To hoard excess capital cannot be good for balance in national economy. It is wiser to leave an efficient economic system than a fiscal hedge to the future generation. The economy should be managed to run at 3 percent growth annually. Public finance must play a role in stimulating growth.

What about liabilities building up in the National Pension Fund?

The National Pension Fund and other social funds require structural reforms so as not to burden future generations. Public finance also must play a role for social balance, such as lowering the population concentration around Seoul and increased infrastructure through building hospitals, public schools and libraries in rural areas for balanced growth.

Taxpayers have been outraged by over-spending initiatives such as subsidizing mobile phone bills.

Tax funds should be well spent. The subsidy to mobile phone would save each individual 20,000 won. Regardless of controversy over the scope, the relief fund helped stimulate consumption.

Regardless of colossal spending, jobs and population growth had been stagnant.

Low birth rates and job growth cannot be solved easily. Still, the government must not give up. Although the effect comes slowly, these efforts will eventually bear fruit. Otherwise, welfare costs could suddenly jump as basic income could become needed.

What about the ever-growing welfare cost? How can the money be collected?

We may end up having to raise taxes. Tax increases so far have been limited to the super-rich. But the scope must be widened once the economy recovers.