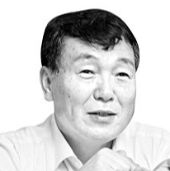 So Kang-chun
The author is the director of the National Institute of Korean Language.


“When language is elevated, the country goes high. When the language falls, the country goes down,” said Ju Si-gyeong (1876-1914), one of the founders of modern Korean linguistics. His comment is often quoted for Hangul Day on Oct. 9. But looking at the language that is used today, I feel embarrassed. We need to seriously think about what it really means to elevate the language.

Historically, Korea was influenced by neighboring China. During the reign of King Gyeongdeok in the Silla dynasty (57 B.C. to 935 A.D.), the names of people, locations and official titles were changed to words with Chinese characters as a policy. In the Goryeo (918-1392) and Joseon dynasties (1392-1910), the Chinese characters were used in official documents.

Hangul was rolled out in 1446, and nearly 450 years later, it became the official language, but the Japanese colonial rule led to struggles. Exclusive hangul use was established not long ago. I am afraid many beautiful Korean words have been lost because of various challenges.

Lately, words taken from English and the Western world erode the Korean language. As the phenomena influences linguistic expressions and vocabulary, it is growing more destructive. 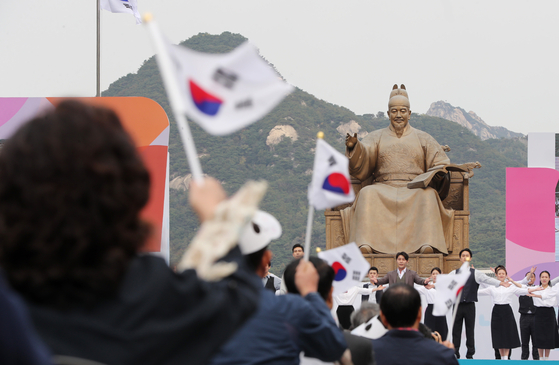 A ceremony to celebrate the creation of hangul, the Korean alphabet, was held in front of the statue of King Sejong the Great on Oct. 9, 2018. [KIM KYUNG-ROK]

Of course, attempts to accept advanced culture and make the Korean language and culture richer should not be blamed. But we should be wary of thoughtlessly using foreign words and phrases.

In many cases, foreign language is a barrier between those with the knowledge and without. Therefore, public agencies and the private sector, should avoid using complicated terms.

Difficult and professional words and phrases used exclusively by a certain group can alienate listeners. It is concerning that the latest use of foreign and newly coined words and phrases cause national division beyond cutting off communications between social groups. This is a challenge that should be overcome.

Hangul is a scientific writing system that reflects King Sejong’s dream of creating a world where people can learn and deliver their intentions without knowing the Chinese characters. Elevated language could mean a world where people are considerate and communicate with one another.

After establishing a group of professionals in various fields, they get together and find difficult foreign words spotted in the media or press releases by government agencies. They exchange opinions on an online forum, come up with alternate words and phrases in three days and promote the usage of the Korean terms.

“Infodemic” is a foreign term referring to the phenomenon of malicious rumors or distorted information spreading like an epidemic. The group changed the word into a Korean term meaning the “spread of malicious information.” “Cohort isolation,” which means shutting-down an entire medical facility with positive cases to prevent the spread of Covid-19 also was changed to a Korean term which can translate to “Same Group Isolation.”

“Gaslighting” — the act of manipulating psychology and situations to disable judgment of a person and strengthen control or dominance — was changed to a Korean term that can be translated to “psychological dominance.”

“Zero waste,” the movement not to consume unnecessary resources, is recommended to be called “reducing waste.”

Phenomena or cultures that are new to Korean society are often introduced in foreign languages. The terms may be familiar to experts in the field, but most citizens have a hard time guessing the meaning.

For important words and phrases, it is crucial to change them to Korean words that are easy to understand and can be used without misinterpretation. That is the way to elevate the language and the country.