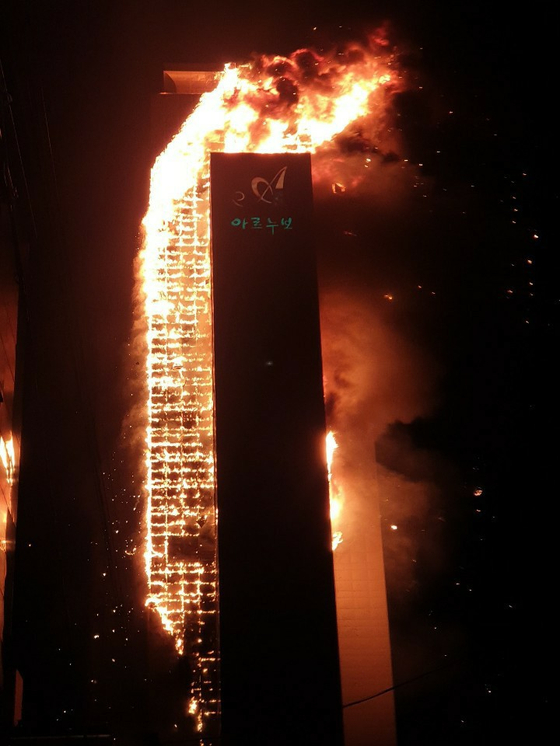 The Samhwan Art Nouveau building in Ulsan is ablaze on Friday. The fire broke out late Thursday night and it took more than 14 hours to control. [YONHAP]


A massive fire at a high-rise apartment building in Ulsan was controlled after more than 14 hours. No casualty was reported.

According to the Ulsan Fire Department, flames were first reported at the Samhwan Art Nouveau building in the city’s Nam District around 11:07 p.m. The 33-story building has commercial space and 127 apartments.

“As of 12:35 p.m. of Friday, we managed to put out major flames,” a spokesperson for the department announced.

Shortly after the fire began, strong winds helped it spread. Nearly 500 firefighters and 60 vehicles were mobilized to extinguish the blaze initially.

Firefighters struggled throughout Thursday night and flames spread to the top floors. Ulsan does not have a fire engine with a ladder longer than 70 meters (230 feet), so 89 vehicles and 272 firefighters from Busan, Daegu, Changwon and other areas of South and North Gyeongsang provinces were sent to the site.

During the first hours of the fire, hundreds of people evacuated the building. The fire authorities rescued 77, including some who escaped to the rooftop.

As of 10 a.m. Friday, no casualty was reported. According to the Ulsan Fire Department, 88 people were sent to nearby hospitals for treatment for smoke inhalation or other minor injuries.

Interior and Safety Minister Chin Young traveled from Seoul and arrived at the site around 8:20 a.m. Friday to oversee the firefighting operation.

The Ulsan Metropolitan Police Agency said Friday it created a special team to probe the cause of the fire. A 40-member team will investigate with the fire department and the National Forensic Service.

A separate team of 10 police offers were formed to support victims.