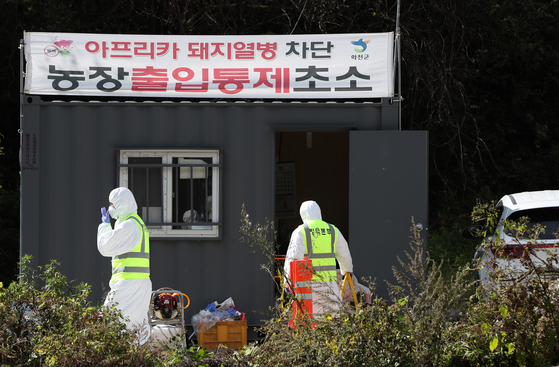 Quarantine workers restrict entry into a farm confirmed to be infected with African swine fever in Hwacheon,Gangwon on Sunday. [YONHAP]


A second pig farm on Saturday detected cases of the deadly African swine fever in Hwacheon County, Gangwon, following an outbreak last week at a nearby farm.

The pigs at the new farm have already been killed, as it was subject to a collective culling in response to last week's outbreak.

The Agriculture Ministry ordered around 2,500 pigs from three hog farms in the region to be slaughtered. The ministry decided to cull all 945 pigs on the farm that supplied them, plus an additional 1,525 from two farms located within 10 kilometers (6 miles).

This was the first time in a year that the disease was found in farm pigs.

According to the Ministry of Agriculture, Food and Rural Affairs, three female pigs were found dead in a slaughterhouse in Cheorwon County, Gangwon, on Thursday. They were all later confirmed to have been infected by the disease, and were among the eight infected pigs from the Hwacheon pig farm.

The government agency said it will inspect 373 pig farms in Gangwon and Gyeonggi for additional cases. So far, it has collected field samples from 291 farms, of which 163 farms tested negative for the virus.

African swine fever has no known cure, and culling is the only way to prevent its spread.

The government also ordered a 48-hour lockdown on pig farms, slaughterhouses, feed factories and vehicles working at such facilities in Gangwon and Gyeonggi until Monday at 5 a.m.

Wild boars had been infected with the disease in Hwacheon, but this was the first time pigs on farms were affected. The farm where the three dead pigs were found was just 250 meters (820 feet) from the point where the infected wild boars were found.

Within the county, around 290 wild boar carcasses have been found to be infected so far.

After the first outbreak in Paju, Gyeonggi, in September 2019, more than 430,000 pigs were culled to prevent the spread of the virus. Thinking the disease had died down, the Agriculture Ministry had started to ease regulations on pig farms. On Aug. 9, farms that had culled pigs due to the earlier outbreak in Gyeonggi and Gangwon were allowed to resume taking in new pigs. That was halted indefinitely on Friday.