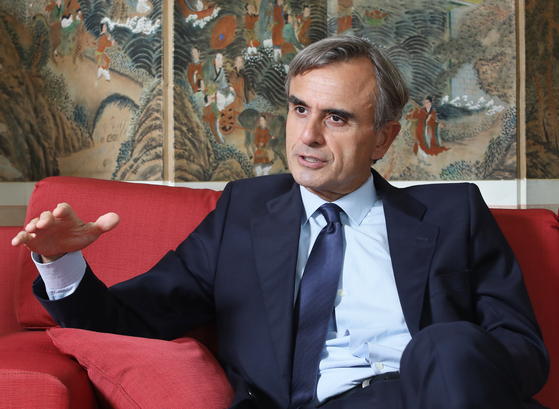 Spanish Ambassador to Korea Juan Ignacio Morro speaks with the Korea JoongAng Daily at his residence on Tuesday to mark the 70th anniversary of diplomatic ties between Spain and Korea. [PARK SANG-MOON]

In this unusual age of social distancing around the globe, Spain is hoping to shorten the distance with its partner in Asia as they celebrate their 70th anniversary in ties this year.

“Spain and Korea have great and excellent relations, but not intense enough — we have so much potential to do more in every field, be it political dialogue, trade, cultural exchanges or tourism,” said Juan Ignacio Morro, ambassador of Spain to Korea, in an interview at his residence on Tuesday. “The pandemic has only proven that the world is that much more connected, that the world is so much smaller than before.”

Spain and Korea signed their bilateral ties on March 17, 1950.

Circumstances at home engrossed much of their attention in the early decades of their relations — of which the Korean War (1950-1953), the transition from dictatorships to democracy in the 1970s and ‘80s and economic recessions were but a few.

“It wasn’t until the early 2000s that Spain started seeing Korea as a strategic partner in Asia,” wrote Chun Hong-jo, Korean ambassador to Spain, in a special commemorative book on bilateral ties published by the Korean and Spanish governments last month. “By 2008, when the first G-20 summit took place, both Korea and Spain saw each other as the best, like-minded partners sharing common values on democracy, human rights, rule of law, market economy and multilateralism.”

More recently, Korea signed an FTA with the European Union in 2010, and since then, its trade with Spain has expanded, hitting 5.3 billion euros ($6.2 billion) last year.

The number of Korean tourists to Spain has grown exponentially in the past decade, reaching some 630,000 in 2019, according to the Spanish Embassy in Seoul.

It was also last year that Korea welcomed the royal visit of King Felipe VI and Queen Letizia. The previous royal visit from Spain to Korea was in 1996.

The Covid-19 pandemic earlier in this year has brought disruptions to the diplomatic activities, but it has also led to different windows of opportunities.

Picking up a new language, for instance, has been one of the popular ways people have opted to use their newfound time from the absence of their usual list of activities.

“Spanish is being taught at 16 universities in Korea,” Morro said. “But there is so much more potential for growth in the Spanish language programs here, given that it is spoken by more than 550 million people and is the official language spoken in 21 countries."

The embassy is working on bringing the Cervantes Institute, Spain’s public institution on Spanish language and culture, to Seoul soon.

“The halt in activities brought on by the pandemic is pushing both Spain and Korea to expand one's boundaries, to intensify the existing relations and to find new ways to cooperate,” Morro said. “The time is ripe for a turning point in the bilateral relations, and the royal visit last year was just the beginning.”

Ambassador Morro recalled highlights in the past 70 years of friendship between Spain and Korea and his hopes for the next milestones to come. The following are edited excerpts of the interview. 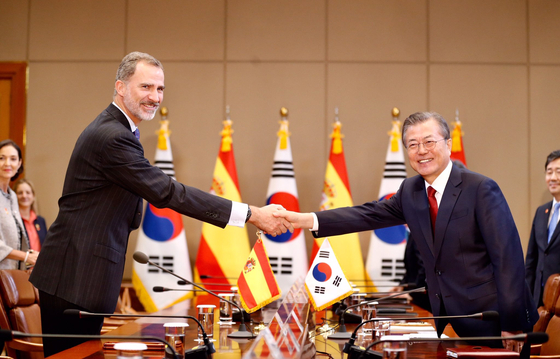 President Moon Jae-in, right, and King Felipe VI at the Blue House in October 2019. [EMBASSY OF SPAIN IN KOREA]

In celebrating 70 years of diplomatic relations between Korea and Spain, where do you see the most potential for growth in bilateral cooperation?
Tourism, trade and investment and education and language would be amongst those at the top of the list. Tourism is a very important issue for Spain. We are No. 2 in the world in terms of income earned from tourism and also in terms of the number of tourists received in the country. In 2019, we welcomed 83 million tourists in the nation, and income in the tourism sector generated about 12 percent of our GDP.
Before the Covid-19 outbreak, we were also seeing some very exciting growth in tourists from Korea. We had about 25,000 Korean tourists in Spain in 2008. This number grew to half a million by 2018. Then within a year, they grew to 630,000. Spain, a tourist destination especially during the summer, is suffering from a second wave of Covid-19 cases but we believe the situation will stabilize soon. What I’d like to emphasize here is that all the infrastructure on tourism are all intact. It means that sans the viral outbreak, we can pick things back up in no time.


What areas of trade and investment are most important to Spain-Korea cooperation?
As of late, we saw an increase in the trade of goods in the defense industry, such as the four Airbus A330 Multi Role Tanker Transport that Korea bought from Spain in 2018 and 2019. Every year there is more stable trade in car components, gastronomy, including wine, oil and pork, and also in design and fashion as well as in intermediary machinery.
It’s worth noting that both Spain and Korea have excellent records on construction and infrastructure projects. There are around 56 multinational projects that Spain and Korea have taken on together in 17 countries. They include projects on highways and mines in Australia, subway construction in Riyadh, Saudi Arabia, oil refinery in Kuwait, as well as other projects in Peru and Turkey. Korea’s Kotra [Korea Trade-Investment Promotion Agency] and Spain’s ICEX [Spanish Institute for Foreign Trade] have also been working together to provide competitive investment opportunities.


What does “strategic partnership” between Spain and Korea mean in simpler terms?
It means having a solid relation and confidence in sharing political views openly based on common positions. Your opinions are important for us in regions where we may not be experts. And vice versa. Korea is a leader in Asia. I was stationed in Korea as a cultural affairs officer from 1994 to 1997, during the Kim Young-sam administration. Korea by that time was already growing to be a great power. Today you are a leader in the tech industry and you have also proven that you can guide the world in the fight against the Covid-19 outbreak. You are present in the multilateral meetings and are respected by a lot of countries. The invitation for Korea to join the next G7 summit is just one example.
Spain has a very high profile as well. We are interested in working closely with Asia and we believe that with Korea, a like-minded partner that respects democratic values, we have almost no issue where we would not be seeing eye-to-eye. We understand that Korea is interested in opportunities to partner with Latin America. That is where we would be able to share our experiences and knowledge. Spain can be Korea’s gateway to Latin America, and Korea Spain’s gateway to Asia. 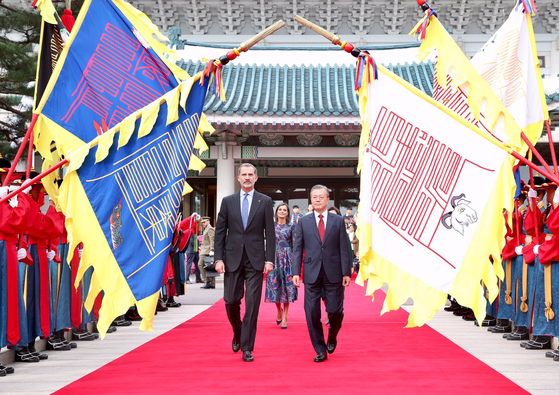 President Moon Jae-in, right, and King Felipe VI at the Blue House in October 2019. They are followed by Queen Letizia and First Lady Kim Jung-sook.[EMBASSY OF SPAIN IN KOREA]

The Covid situation has reduced most diplomatic events. Oct. 12 is a national holiday in Spain. How will it be celebrated differently this year?
Due to the pandemic, we will not be hosting a celebration to the usual scale. But we are organizing an event to present the special 70th anniversary book put together by the governments of Spain and Korea and the Spanish Centre for Korean Research.


The pandemic has also put a standstill to the people-to-people exchanges, the heart of public diplomacy. Please share any anecdotes of Spanish individuals in Korea that may be representative of the bilateral friendship.
When I was here in Korea 25 years ago, I met Padre Jesus Molero. I had very good relations with him. He came to Korea after the war. He found the country devastated. He dedicated the rest of his life here to help the Korean people, and to his end he loved the Korean people. He died in 2018, just a few months before I returned to Korea.
Another Spanish person who dedicated his life to Korea was Padre Jose Maria Blanco. He came in 1962. He told me that much of the country was still in a difficult place when he arrived. Whenever he spoke of Korea, you could tell he was very proud of how much Korea had achieved.
It’s been a tradition for Spanish Catholics to provide their services wherever they were needed, even in regions far away from home. That explains how even in as early as the 16th century, there were Spanish priests in Korea. In fact, the visit by the first Spanish priest to Korea — Gregorio de Céspedes in 1593 — was the first time ever that a European had landed in Korea, according to the historical records.