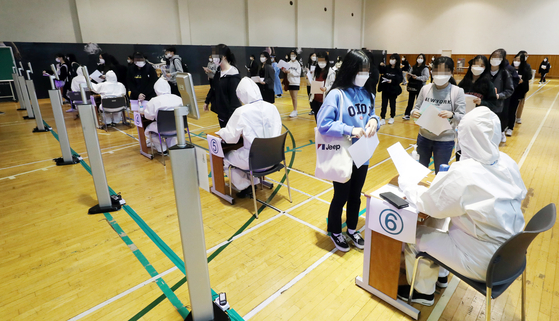 Students undergo body temperature checks before testing for an exam at Sungshin Women's University in central Seoul on Sunday. [YONHAP]

Nationwide social distancing restrictions will be relaxed to Level 1 starting Monday, although most requirements for cafes and high-risk businesses in the greater Seoul area will be maintained, the prime minister announced Sunday.

“The average number of daily cases in the past two weeks was around 60 or less, and we are seeing some positive signs when it comes to controlling the outbreak,” said Prime Minister Chung Sye-kyun in a meeting at the Central Government Complex in Seoul on Sunday.

Most of Korea has been under the Level 2 restrictions since mid-August, when Korea experienced a second surge of cases after its initial large-scale outbreak in late February and March.

For sports fans the change is welcome news, as it means audiences will be allowed to return to stadiums again — though attendance will be limited by the one-meter (3.28 feet) social distancing recommendations.

Similar guidelines will remain in place for cafes and restaurants in Seoul, Gyeonggi and Incheon, where the recent surge in Covid-19 cases has been concentrated.

“We will keep the necessary measures from the Level 2 recommendation in the greater Seoul area, where the numbers are still quite high, especially for certain high-risk businesses,” Chung said.

These include placing tables at least one meter apart from each other. Customers inside restaurants and cafes will be asked to have their masks on when not eating or drinking.

Certain high-risk businesses — such as clubs, bars that involve dancing and moving between tables, door-to-door sales businesses and noraebangs (booth-type singing rooms) — that were shut down since mid-August were allowed to re-open under their local government offices' directives beginning Oct. 5 in areas outside of the greater Seoul area.

Forced to remain closed in the greater Seoul area, those businesses will be allowed to open from Monday, but will be asked to limit the number of customers to ensure minimum social distancing.

Churches, some of which were also at the center of the recent surge of Covid-19 cases, will be allowed to hold in-person services again, but with limited numbers of congregants and with measures to allow quick tracing in case of outbreaks, such as keeping an entry log for members attending services.

Education Minister Yoo Eun-hae also announced Sunday that kindergartens, elementary and middle schools throughout the country, which have been allowing only a third of the student body to be present in school at a time, will allow up to two-thirds of students to return, starting Oct. 19. High schools have allowed two-thirds to be physically present, and will maintain this level.

Some schools may seek to allow their entire student bodies to attend classes every day by allowing half of the students to take morning classes only and half afternoon classes only.

“We ask not to have the whole student body present at one given time together,” Yoo said in a press briefing. 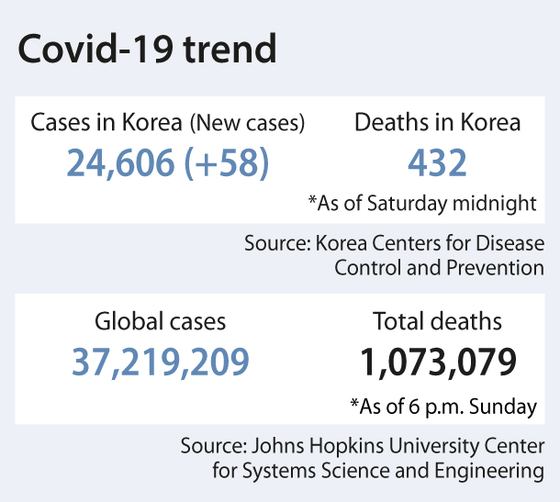 Prior to the weekend, there were growing concerns that conservative rallies would take place once again in the Gwanghwamun Square in central Seoul to commemorate Hangul Day. A large rally held there in mid-August generated one of Korea's largest coronavirus clusters and helped drive the second surge in Covid-19 cases.

The government dismissed requests from groups to hold rallies there the past weekend, and blocked the square using police buses and other government vehicles.

“No one rallied at the square and we are thankful to all groups who refrained from doing so for the sake of public health and safety,” Chung said.

Korea recorded 58 new cases of Covid-19 on Saturday, of which 12 were imported. It was the fourth day in a row that the numbers stayed in the double digits.

Among the 46 domestic cases, 19 were based in Seoul and 18 in Gyeonggi.