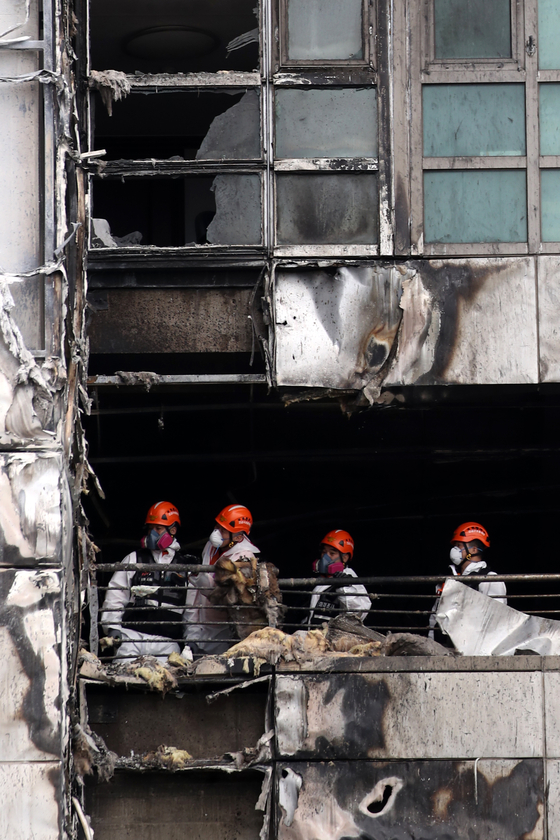 Officers of Ulsan police and fire department are inspecting on Sunday the high-rise apartment building in the city which was ablaze for more than 15 hours form Thursday to Friday, to determine the cause of the fire. [NEWS1]

Ulsan police and fire officials on Sunday began investigating the cause of a Thursday night fire that engulfed a high-rise apartment building in the city and burned for more than 15 hours.

“Our investigations will focus on where the fire began,” Eom Joon-wook, chief of the Ulsan Fire Department, said during a press briefing Saturday. “At this point we don’t have a clear indication of where that was.”

The initial report that the 33-floor apartment building in Nam District, Ulsan, was on fire came from a resident on the 12th floor, on Thursday at 11:14 p.m., according to the Ulsan Fire Department. The resident said they could see “flames on the outdoor unit of the air conditioner” from their window. Firefighters arrived within five minutes of the report, the fire department said.

As flames spread to the upper floors, the fire appeared to engulf the whole building at one point during the night. Ulsan does not have a fire engine with a ladder longer than 70 meters (230 feet), so 89 vehicles and 272 firefighters from Busan, Daegu, Changwon and other areas of South and North Gyeongsang were sent to the site. The apartment building is 113 meters tall.

Korea's fire departments have just 10 ladders taller than 70 meters — two each in Gyeonggi, Seoul and Incheon and one each in Busan, Daejeon, Sejong and Jeju, according to the office of Democratic Party (DP) Rep. Park Wan-joo.

There are 4,692 buildings that reach higher than 30 floors throughout the country. A majority of them are apartments.

The office in a statement last week called for a general inspection of firefighting facilities throughout the country, and to make improvements to firefighting equipment where necessary.

Four helicopters were mobilized, allowing firefighters to enter the building from above.

The apartment was home to 127 households — around 190 residents total — when the fire broke out. All of them were evacuated or rescued from the rooftop in the first hours of the fire.

The fire was finally extinguished at around 2:50 p.m. on Friday. Authorities reported that 93 people were hospitalized and treated for smoke inhalation, but that there were no deaths or severe injuries.

As many as 175 of the residents have been unable to return home since their evacuation Thursday night, and have been temporarily relocated to nearby hotel rooms. Relocation costs are being covered by the Ulsan city government, whose budget can cover up to 30,000 won ($26.20) in daily living expenses per evacuee in such circumstances.

“Some people have criticized our accommodation to be overboard, but this was the best option we could come up with given that we are in a Covid-19 situation and cannot resort to the normal means to evacuating a large number of people in one place, which would provide ample grounds for a possible outbreak,” said Song Cheol-ho, mayor of Ulsan, in a press briefing on Friday. “Right now, our priority is to protect the evacuees. We can figure out the costs later through investigations and appropriate insurance policies.”

The Ulsan city government said that it may seek compensation once the cause of the fire is determined.

The Ulsan education office said it will be providing new sets of textbooks and uniforms as needed to the 52 students who reside at the building, of whom five are kindergarteners, 20 are elementary school students, 11 are in middle school and 16 are high school students.

The initial inspections began Friday to determine if the building was safe to enter and whether additional structures would need to be installed.

The Ulsan police and fire department said they will also be examining the CCTV camera footage of the apartment hallways to determine where the fire began.