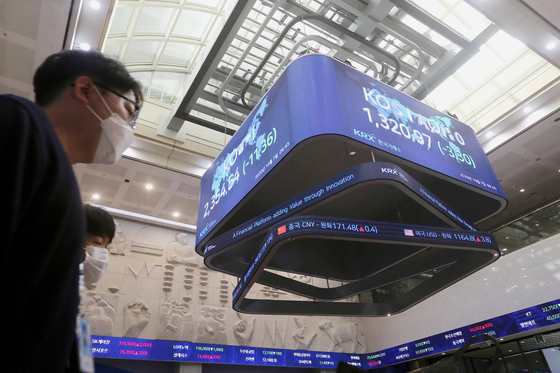 People walk under screens at the Korea Exchange in Yeouido, western Seoul on Oct. 7. [ASSOCIATED PRESS]


Foreign investors in September extended a two-month selling spree in the Korean stock market, according to a report issued by the Financial Supervisory Service (FSS) Monday.

“International investors offloaded shares in a bid to manage possible risk factors from the coronavirus pandemic,” explained an official from the FSS.

Investors from Singapore were far and away the most aggressive sellers, offloading a total of 4.3 trillion won in stocks. Switzerland came in second place selling off a net 0.3 trillion won.

In terms of net purchases, investors from Luxembourg scooped up the most, buying 0.61 trillion won. American investors purchased a net 0.4 trillion won of local stocks. The third-largest buyers were from Germany, who took in a net 0.26 trillion won.

The total value of shares held by offshore investors was 598.4 trillion won as of the end of September, up 1.6 percent from a month earlier and accounting for 30.3 percent of Korea’s market capitalization.

By countries, U.S. investors held the largest value in Korean shares, at 249.8 trillion won, or 41.8 percent of the total held by international investors. The second and third largest investors were Britain and Luxembourg, accounting for 7.6 percent and 6.6 percent, respectively.

Short-term bonds with maturities less than one year were sold the most last month, accounting for 4.4 trillion won, followed by 2.3 trillion won in monetary stabilization.

Investors from Asia held the largest amount of bonds, worth 70.7 trillion won, or 46.8 percent the total, followed by Europe's 31 percent and the United States' 7.9 percent.

Kospi the world's most volatile market in 2020, FKI says