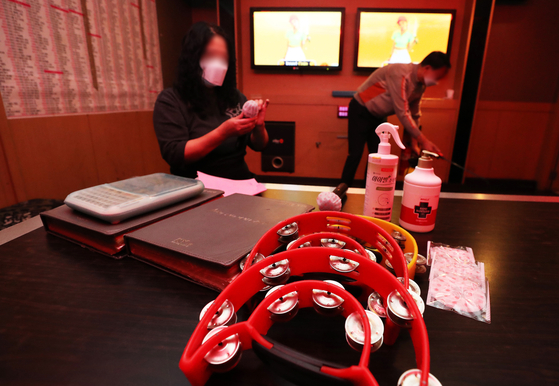 Noraebang (singing room) operator in Seongnam, Gyeonggi, sterilizing facilities on Monday, as the social distancing restriction has been relaxed to Level 1 from Level 2. [YONHAP]


Entertainment and dining establishments closed due to Level 2 social distancing restriction were allowed to reopen Monday following the government's relaxing of restrictions to Level 1.


Up until Sunday, so-called “high-risk facilities,” including bars, noraebang (singing rooms), buffets and cram schools, were forced to shut in mid-August, when Korea experienced a surge of virus cases.

Under Level 2, gatherings were limited to 50 people, with outdoor gatherings limited to 100. There are no such restrictions under Level 1 as long as people wear masks and take other precautions.

But there are conditions.

Visitors will have to keep masks on and leave behind a record of their visit. Bars and clubs have to allot 4 square meters (43 square feet) of space per visitor. The same rule applies at exhibitions, festivals, concerts and academic events with more than 100 people. Door-to-door sales remain restricted.

Although weddings are permitted, people in metropolitan areas are asked to refrain from hosting such events if possible.

Up to 30 percent of seats can be filled by spectators at stadiums for sports events, which didn't allow any spectators under Level 2. The number of people allowed into stadiums is expected to be expanded gradually.

“We had already prepared all the ingredients necessary for reopening the restaurants, risking throwing them all away if Level 2 was extended,” said Lee Hwa-seon, a spokesperson for CJ Foodville. “During those months, we generated zero profit from buffet restaurants in metropolitan areas.”

A reinvention of karaoke bars (KOR)