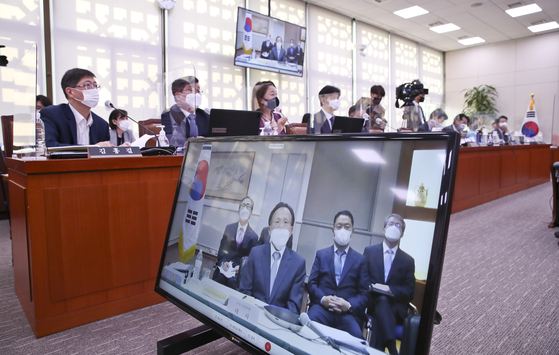 South Korean lawmakers at the National Assembly in western Seoul hold a parliamentary audit hearing with Seoul's ambassador to the United States, Lee Soo-hyuk, on Monday via a remote conference with the South Korean Embassy in Washington. [YONHAP]


Washington supports a formal declaration to end the 1950-53 Korean War as long as North Korea is on board, South Korea’s ambassador to the United States said Monday.

In a parliamentary audit hearing conducted remotely between the National Assembly and the South Korean Embassy in Washington, Ambassador Lee Soo-hyuk said a high-ranking U.S. official had confided in him that the United States agreed with South Korean President Moon Jae-in’s pursuit of the declaration as a means to advance Pyongyang’s denuclearization.

Lee pushed back against criticism leveled at the declaration idea by opposition People Power Party (PPP) Rep. Thae Yong-ho, a North Korean defector. The diplomat argued such a declaration would not undermine denuclearization in the North, but in fact reinforce it by restoring dialogue with Pyongyang.

Moon last week echoed his earlier call at the United Nations for an end-of-war declaration as part of an effort to revive the aborted talks between Washington and Pyongyang over the latter’s nuclear program.

But Seoul’s continued drive to broker further dialogue has been met officially with silence from the North and United States, both of which have been occupied with major domestic events in recent days.

According to Lee, who served as South Korea’s top envoy to the six-party talks in 2003, Pyongyang may also be observing how the situation unfolds with regard to the upcoming U.S. presidential election next month, suggesting the regime may withhold further action until the race is decided.

Lee also offered his analysis of how American policy toward the Korean Peninsula would pan out following the election, and the implications of a potential victory for Democratic challenger Joe Biden over incumbent Donald Trump.

A new U.S. administration under Biden is unlikely to continue Trump’s “top-down” style of diplomacy throughout the last four years, Lee said.

Trump’s off-the-cuff style of dialogue with Pyongyang has been credited with bringing about his three unprecedented summits with North Korean leader Kim Jong-un, albeit with little to show in terms of concrete results.

Biden’s foreign policy team will likely be largely staffed by former members of the Barack Obama administration, Lee said, meaning the White House would likely assume a more orthodox form of decision-making in line with that experience.

“The figures who dealt with the North Korean nuclear issue under the Obama administration fully understand the successes and the failures of the ‘strategic patience’ policy, so we hope they will undertake a different approach,” Lee added, referring to the pro-sanctions, wait-and-see policy Obama undertook toward the North during his tenure.

As to issues pertaining to U.S. alliances around the globe, the Biden camp does not yet appear to have formulated those policy positions in great detail, but would be likely to take the attitudes of U.S. allies into greater consideration, Lee said.

But no matter the outcome, Seoul will have a tough path ahead in terms of defense cost-sharing negotiations, the envoy said.

“There appears to be no discrepancy in the United States about the idea that [South Korea’s] defense burden needs to be hiked,” Lee added. “We need to become more careful and meticulous in our negotiations.”