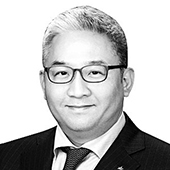 Lee Sang-kyun
The author is the president of the Korea-Russia Arts and Culture Society.


Long before they established a diplomatic relationship, art and culture were the ties that connected Korea and Russia. That was also the key to resolving serious ideological conflict between the two countries. Russia’s culture and art — first introduced to Korea around the 1988 Olympic Games — has become a part of our daily lives. Russia became one of the first destinations for Korean artists’ performances and exhibitions overseas.

In Moscow, K-pop and K-beauty as well as other K-culture products such as movies and TV shows became increasingly popular. Although the Korean national team failed to advance to 16th round at the 2018 Russian World Cup, BTS’s “Fake Love” was selected as background music for the semi-final match.

A statute of Alexander Pushkin was erected in Seoul in 2013 and Pyotr Tchaikovsky’s statute was put up on the campus of Shinil High School in 2017. In 2018, a statute of Park Kyung-ni, a legendary novelist, was erected at Saint Petersburg State University. They are the symbols of peace, friendship, trust and co-existence promoted by the two countries’ cultural exchanges. 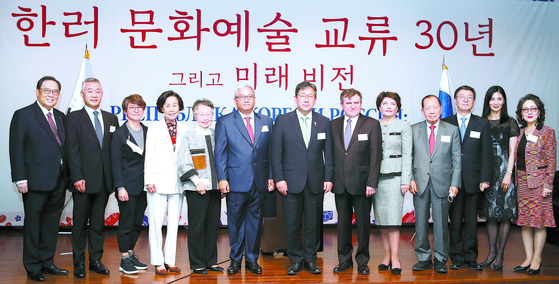 Members of the Korea-Russia Arts and Culture Society pose for a photo to celebrate the 30th anniversary of the establishment of diplomatic relations between Korea and Russia at Silla Hotel on Oct. 8. [KWON HYUK-JAE]

Korean commercial products such as cars, home appliances and mobile phones are popular in Russia. According to the Association of European Businesses, Hyundai and Kia Motors sold 93,446 cars in Russia during the first quarter of this year. That figure is higher than Russian carmaker Lada’s 79,600. Hallyu, or the Korean wave, is making Russian consumers more friendly to Korean products.

Some are voicing concerns about the imbalance in cultural exchanges. While Russia exports high-class culture and art, such as ballet and classical music, to Korea, Korea is mostly exporting pop culture to Russia. But five musicians won top prizes in the International Tchaikovsky Competition in 2011, shocking the entire world. This is the power of Korea’s classical musicians. Son Yeol-eum, the second-prize winner at the Tchaikovsky International Piano Competition, and Cho Seong-jin, who won third prize in 2011, are joining the ranks of the maestros in Russia.

In 2019, the Korea-Russia Arts and Culture Society (Koracs) hosted the first International Tchaikovsky Online Piano Competition for Young Musicians in cooperation with the Association of Tchaikovsky Competition Stars. It was part of the globalization of Korea’s classical music.

It is unfortunate that many performances planned this year to mark the 30th anniversary of Korea-Russia diplomatic relations were canceled due to ongoing Covid-19 outbreaks. Renowned pianist Elisabeth Leonskaja and the Eifman Ballet of St. Petersburg were scheduled to perform in Korea, but unfortunately they were canceled. Pianist Ra Jung-hye was scheduled to perform at the Rachmaninov Concert Hall for the first time as a Korean pianist, but her concert also was canceled.

The Korea-Russia Arts and Culture Society and the Alexander Gorchakov Public Diplomacy Fund jointly hosted an online conference in Seoul and Moscow on Oct. 8 under the title of “The Republic of Korea and Russia: 30 Years of Friendship and Cultural Exchanges.” The event portrayed the two countries’ passion to maintain their exchanges of culture and arts in the face of the pandemic.

It is an accomplishment that experts of the two countries have created a platform for communication and cooperation at all times, with Special Representative of the President of Russia for International Cultural Cooperation Mikhail Shvydkoy at the center. Furthermore, cooperating with the Alexander Gorchakov Public Diplomacy Foundation will offer an opportunity for the Korea-Russia Arts and Culture Society to expand its 1.5-track function in public diplomacy.

Next year, Korea is scheduled to host Russian Seasons — a big event that features Russia’s arts and culture such as music, plays and ballet throughout the year. Korea is the fourth country to host Russian Seasons after Japan, Italy and Germany. As the entire Korean Peninsula is the venue of the event, we expect to see great effects from it. And in November, Korea will also be the main guest at the St. Petersburg Cultural Forum.

In his book, “What is Art,” Leo Tolstoy found the true value of arts in its ability to affect one another. The people of Korea and Russia should be more deeply affected by each other’s arts and cultures so they can co-exist in a world of love for humanity.

Fair rules and culture bring out the best

Fair rules and culture bring out the best (KOR)