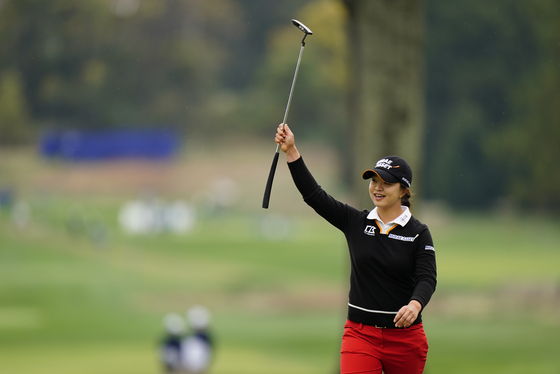 
Kim Sei-young has finally won a major title in her sixth year on the LPGA Tour, taking home the trophy at the KPMG Women’s PGA Championship at Aronimink Golf Club in Newtown Square, Pennsylvania on Sunday.


Kim, who started the final round with a two-shot lead over Brooke Henderson of Canada, finished the tournament in style by shooting another bogey-free round of seven-under-par, 63, to finish the tournament five shots ahead of runner-up Park In-bee.

“I’m actually really hiding my tears at the moment,” Kim was quoted as saying on the LPGA website.

Kim’s bogey-free round of seven-under-par, 63, was good enough to tie the record for the tournament. Her four-day total winning score of 14-under-par, 266, allowed Kim to set the championship scoring record.

This is already the second record Kim has set as she previously set the record for the lowest 72-hole scored and the lowest to par score, at 257, 31-under-par, back at the 2018 Thornberry Creek LPGA Classic.

Despite her dominant performance on the final day, Kim said she felt some pressure ahead of her round on Sunday.

“I won’t lie, I did feel the pressure starting last night,” Kim was quoted as saying. “I actually arrived about 30 minutes later than I normally do at the golf course. I really tried to stay composed during the tournament, during the round, and I’m happy I got it done.”

With a win, Kim took home the prize money of $645,000 and picked up her 11th career victory on the LPGA Tour. Along with that, Kim got one step closer to getting her name added to the LPGA Tour’s Hall of Fame, as she finally picked up her first-ever major title.

“It was a major that I really wanted,” Kim was quoted as saying. “I dreamt of winning a major championship after seeing Se Ri Pak winning the first one for our country. To be honest with you, I didn’t know it was going to take this long.”

Her major title is a long-awaited victory. Kim started her LPGA Tour career in 2015 and quickly got attention with three tournament victories. That performance was good enough for her to win the LPGA Tour’s Rookie of the Year award. Then, by adding two more victories in her second year, she proved that there’s no such thing as a second-year jinx.

Having adding a win each in the 2017 and 2018 season, Kim once again had another strong year in 2019, winning three tournaments. That season she won the season finale, the CME Group Tour Championship. Kim’s win at the season finale last season remains her biggest accomplishment in terms of prize money as the tournament was the best-paid in the history of women’s golf, with the winner taking home $1.5 million.

“Definitely a different feeling,” Kim was quoted as saying. “Winning CME was great, it was really thrilling, but this one, it feels like a dramatic accomplishment. I’m very happy.”

As the LPGA Tour was delayed and had some schedule changes, her major victory is a lot more meaningful. Due to the coronavirus pandemic, the LPGA Tour halted its season after the ISPS Handa Women’s Australian Open in February.

The LPGA Tour restarted its season in the last week of July, with the LPGA Drive On Championship. But during the time the Tour was paused, Kim played on the KLPGA Tour.

She was one of the first Korean golfers that spent the summer playing on the KLPGA Tour to return to the United States, restarting her LPGA Tour season with the Walmart NW Arkansas Championship presented by P&G, at the end of August.

“It was just so hard to believe that she never won a major before because if felt like she won a few,” Park was quoted as saying.

Park is the former world No. 1 and Hall of Famer, with seven major titles throughout her career. She came close to catching up to Kim’s lead but had to settle for a runner-up finish, five shots behind Kim.

Aside from the two, Park Sung-hyun was the third-best Korean golfer at the tournament, finishing 17th with a four-round total of two-over-par, 282.

Henderson of Canada, who started the final round as runner-up, ended up finishing sixth at three-under-par, 277.

Nasa Hataoka of Japan and Carlota Ciganda of Spain ended up finishing tied for fifth with a four-round total of seven-under-par, 273.

After a week off, the LPGA Tour will continue its season with the LPGA Drive On Championship — Reynolds Lake Oconee in Greensboro, Georgia, from Oct. 22 to 25.