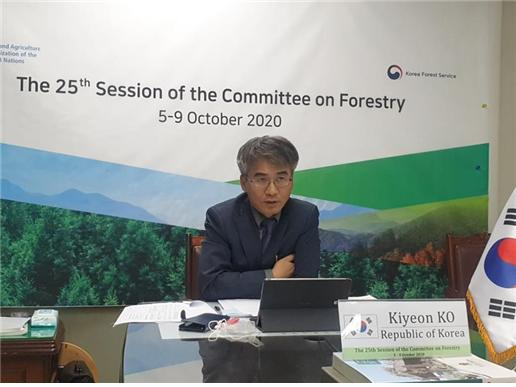 
South Korea has ranked first among 39 countries when it comes to forest expansion per hectare in the last 25 years.

According to the Korea Forest Service, based on the latest report from the United Nation’s Food and Agriculture Organization’s Committee on Forestry (COFO), South Korea’s average growing stock per unit area expanded 196 percent per hectare between 1990 and 2015. It grew from 50 cubic meters (1,766 cubic feet) per hectare to 148 as of 2018.

The COFO held its biannual meeting between Oct. 2 and Oct. 12, in Rome.

North Korea, while not ranked, saw its growing stock expand 3 percent at 63 cubic meters per hectare.

Ko Ki-yeon, the Korea Forest Service’ director general on international affairs, said South Korea is one of the few countries that has succeeded in expanding its green environment under such a short period. The government between 1973 and 1987 planted roughly 10 billion trees.

South Korea’s forest expansion is exceptional considering that during the same period, Japan saw its forests expand 50 percent from 125 cubic meters per hectare to 187.

However, South Korea’s growing stock in total volume is only half of that of the top countries. As of 2015, New Zealand, which ranked top, has a volume of 382 cubic meters per hectare. No.2 Switzerland had 352 and Slovenia 356 cubic meters.

According to the Korea Forest Service, as of 2018, South Korea’s growing stock total volume amounted to 158 cubic meters per hectare, indicating that it is growing by 4 cubic meters every year.