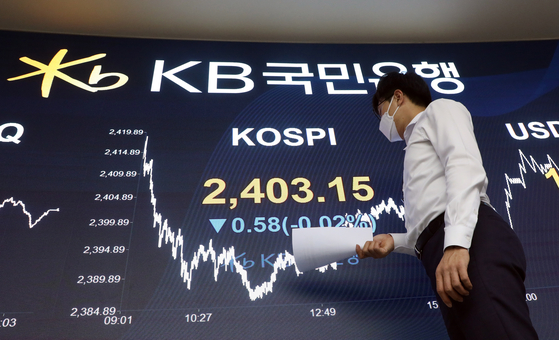 A screen shows the closing figure for the Kospi in a trading room at KB Kookmin Bank in the financial district of Yeouido, western Seoul, on Tuesday. [NEWS 1]


Stocks ended their eight-session winning streak Tuesday as investors became risk-averse over a resurgence of the coronavirus. The won fell against the dollar.

Trading volume was moderate at about 715 million shares worth some 10 trillion won ($8.7 billion), with losers outnumbering gainers 504 to 322.

The Kospi fell back into negative terrain after opening a tad higher following an overnight Wall Street rally.

Investor sentiment worsened as the country's new Covid-19 infections bounced back into the triple digits, stoking fears that the pandemic may inflict more damage on the economy.

The local currency closed at 1,147.1 won per dollar, up 0.3 won from the previous session's close.

Bonds, which move inversely to yields, finished mixed. The yield on three-year bonds remained unchanged as of yesterday at 0.925 percent, and the return on 10-year bonds fell 0.4 basis points to 0.77 percent.

Stocks drop as investors flee to safety on Russia news