One family explores all Uiseong County has to offer

One family explores all Uiseong County has to offer 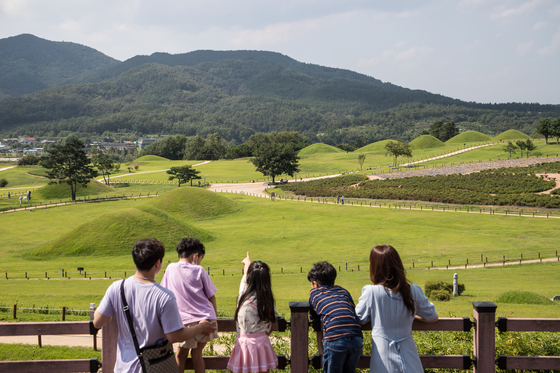 Geumseongsan Gobungun, located in Uiseong, North Gyeongsang, is an ideal destination for families wishing to visit less crowded areas. It is a historic site where the Jomun Kingdom was located 1,800 years ago. [CHOI SEUNG-PYO]


October is probably the best season to enjoy every nook and cranny of the country thanks to the clear and crisp weather, but in the midst of a pandemic, choosing a destination is not as easy a task as it once was.

For families who want to avoid crowded areas that are popular with tourists but who still wish to get away before the end of the year, Uiseong County, North Gyeongsang, is highly recommended.

Uiseong is well known as the garlic-growing district, but the county, situated in the heart of North Gyeongsang, has everything a family needs for a vacation. A crystal-clear valley, complimentary campsite, cultural heritages and unique accommodation are all available in Uiseong.

Most recently, Lee Bong-yong, 40, Kim Gi-yang, 38, and their three children paid a visit to Uiseong for two days and allowed the JoongAng Ilbo to accompany them on their trip. 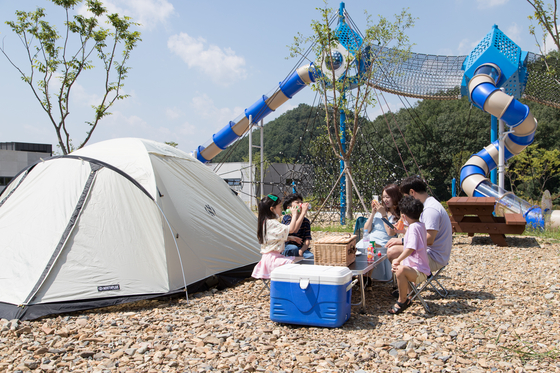 A camping site is open at the entrance of the Binggye Valley. [CHOI SEUNG-PYO]

The family's first stop was Binggye Valley County Park. The valley is considered one of eight best landscapes of North Gyeongsang.

Dozens of punghyeol, wind holes, and binghyeol, ice holes, can be found near the valley.

Inside the park, there is a complimentary campsite. Anyone can put up a tent, but it is operated on a first-come, first-served basis. Due to the lack of a reservation system, some campers are unlucky and have to look elsewhere for a place to pitch their tents.

The park will soon open a paid camping site at the entrance of the valley. Including 12 caravans, the site is capable of accommodating 61 groups of travelers.

Lee and Kim's three children enjoyed the playground near the campsite so much that it was difficult to drag them away. 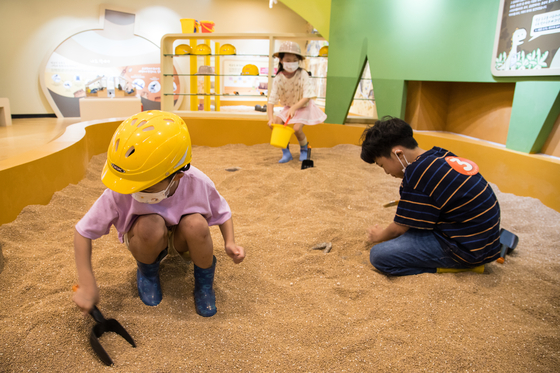 Various hands-on experiences are on offer at the Jomunguk Museum. [CHOI SEUNG-PYO]

The family dined at a beef restaurant located in Geumseong-myeon. Cows reportedly live on garlic in Uiseong, so the beef here tastes different from beef produced in other parts of the country.

Mount Geumseong, which sits 531 meters (1,742 feet) above sea level, is located in Geumseong-myeon. The mountain is an extinct volcano, which erupted 70 million years ago.

Since the soil at Uiseong contains ash from Mount Geumseong, locals say their produce, especially their garlic, tastes superior.

On Mount Geumseong is an area called Geumseongsan Gobungun, which is surrounded by 374 tombs. It is the site where the Jomun Kingdom was located 1,800 years ago, and all the tombs date back to the ancient period.

Geumseongsan Gobungun was chosen as a potential sightseeing spot by Korea Tourism Organization.

The entire site of the Geumseongsan Gobungun is dotted with peonies in May. Pink muhly grass and chrysanthemums sway in the wind in October.

Jomunguk Museum is located just a five-minute drive from the Gobungun. The children frolicked in the playground at the museum. 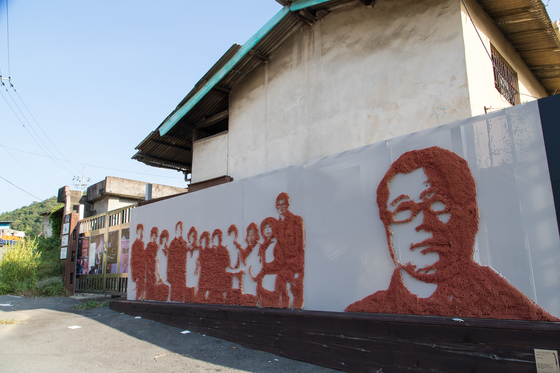 Uiseong is home to the last match factory in Korea, Seonggwang Match. The factory once employed up to 300 people and was one of the few large-sized companies in Uiseong.

As part of a project to remember the match factory, Uiseong county used matches to paint murals at villages around the site where it was once located.

At the community center near the match factory, there is a hands-on class, in which people can make matchboxes. 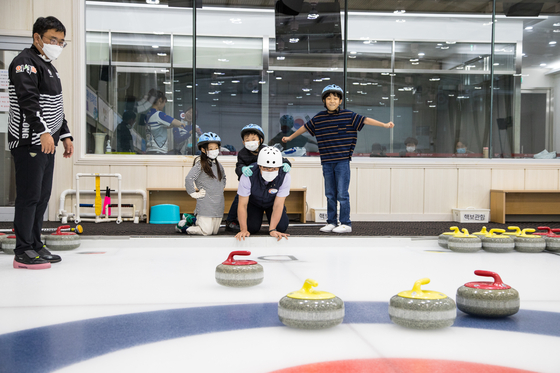 A must-visit spot for sports fans is the Uiseong Curling Center.

The center is the home of Team Kim, the female curlers who won the silver medal at the 2018 PyeongChang Winter Olympics.

Lee and the three kids went onto the curling field. Team Kim made moving curling stones, which weigh up to 20 kilograms (44 pounds), look easy, but when Lee and his three children gave it a try, it wouldn't budge. The children were also able to watch professional curlers exercise. It costs 80,000 won ($68) to use a single lane for two hours. 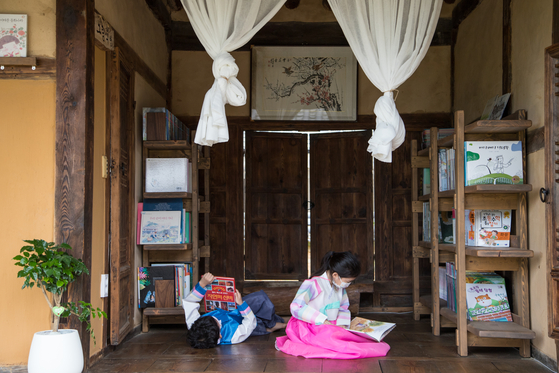 At Sachon Village, which is home to antique traditional Korean houses, there is a place called Uiseong Seodang. It is a library but it also operates accommodation that is often called a book stay. [CHOI SEUNG-PYO]

For dinner the family headed to a restaurant called Yoonkatsu which specializes in fried pork cutlet, located near the Uiseong County Office. As the two-time winner of the Uiseong Super Food Garlic Festival, it came as no surprise that every dish was delicious. The three children were especially fond of the udon and pork cutlet with cheese.

Uiseong offers many options when it comes to accommodation, but old, antique houses are recommended for travelers so they can experience the many historic hanok (traditional Korean house) villages the county has to offer.

Two of the most popular hanok villages are Sanun Village and Sachon Village.

Lee's family spent a night at Sachon Village. Since the children had never stayed in a hanok before, they didn't fall asleep until late, after spending the evening watching stars and fireflies in the backyard. 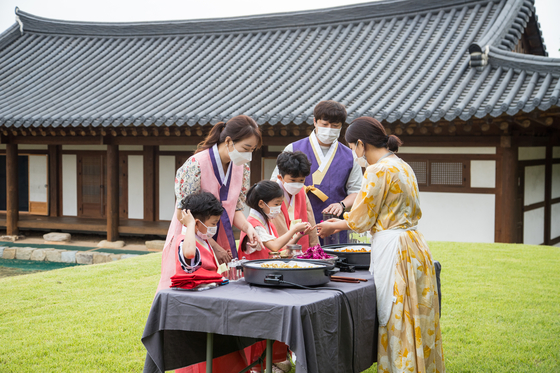 The family ate breakfast at a local restaurant near the hanok and then made flower tea in the front yard of their hanok. First, they roasted various flowers from marigolds to magnolias and then steeped them in hot water.

"Flower teas are believed to be good for your eyes and respiratory system. In addition, the process of making the tea is quite relaxing," said Kim Jeong-hee, who is a flower tea expert.

In Sachon Village, there is a small library called Uiseong Seodang, which opened earlier this year. Seodang means a private village school. The library has 3,000 books and a librarian on duty.

The library lends books for free to those who live in the village. It also operates an accommodation which is called a book stay.

Near Uiseong Seodang is a place called Jagyejeong, which provides a hanbok (traditional Korean garments) rental service. It costs 5,000 won to wear hanbok for two hours. The family enjoyed exploring the village while wearing traditional clothing. 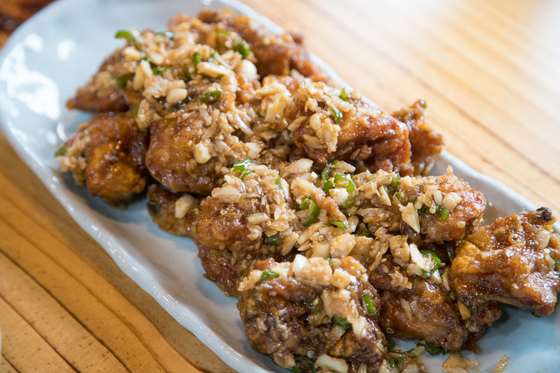 One of Uiseong’s special treats is fried chicken served with garlic produced from the region. [CHOI SEUNG-PYO]

Goun Temple is located 10 kilometers (6 miles) from Sachon Village. The journey from the village was breathtaking as the road is considered one of the most beautiful in the entire nation.

The family looked around Gaunru Pavilion designed by Goun Choe Chi-won, a famed poet and scholar from the Unified Silla period (668-935).

Yeonsujeon Hall located within the temple was designated as a national treasure in August.

When the children began to get hungry, the family headed to a fried chicken joint near the temple in Danchon-myeon.

There they enjoyed some fried chicken which was coated with slices of garlic produced in Uiseong and hot peppers. The first bite was spicy but the garlic left an almost-sweet aftertaste.

Kim, the mother, said, "I'm new to this place, but I had so much fun. I think I'm going to visit here again mainly because of the fried chicken and beef."