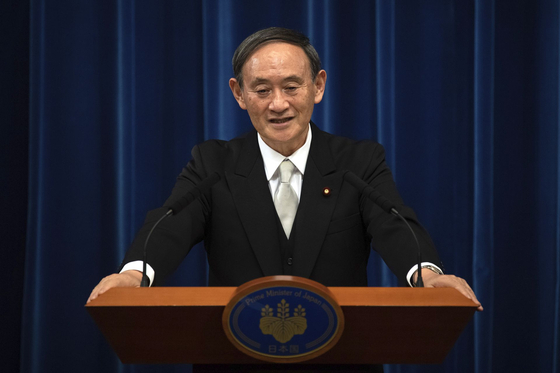 
Tokyo has informed Seoul that its new Prime Minister, Yoshihide Suga, will not be attending a trilateral summit hosted by Korea this year unless the Korean government moves to resolve the issue of wartime forced labor, according to Japan’s Kyodo News on Tuesday.

Citing multiple sources familiar with Seoul-Tokyo relations, the wire service reported that the decision to use Suga’s attendance at the annual Korea-China-Japan trilateral summit as collateral to force Seoul to act was based on the prime minister’s own intentions.

According to the report, Japan specifically wants the Korean government to halt the liquidation of assets owned by Japanese companies in Korea that have been ordered by the Korean Supreme Court to compensate Korean victims of wartime forced labor.

The Japanese companies have refused to comply, and plaintiffs began the legal process of seizing their assets in Korea. Tokyo maintains that all compensation issues related to colonial rule were resolved through a 1965 treaty normalizing bilateral relations.

“As long as there is a possibility of liquidation, Prime Minister Suga will not go to Korea,” said a Japanese government source, according to Kyodo. “There will no longer be the necessary conditions to hold the trilateral summit this year.”

Korea, China and Japan host a trilateral summit in rotation every year to discuss regional economic issues. The most recent meeting was hosted by China in the city of Chengdu in December last year, making it Korea’s turn to host the event in Seoul in late 2020.

Yet Tokyo’s move to make its participation in the summit contingent on the forced labor issue may result in the summit being skipped altogether this year, as the Korean government has maintained it would not intervene in a ruling made by the country’s independent judiciary.

The decision may not be welcomed within Japan itself, however. The Kyodo report noted that Japan has on earlier occasions criticized other countries for tying summit participation to their diplomatic agendas.

In his speech to the United Nations last month, Suga said he would meet North Korean leader Kim Jong-un without any preconditions to normalize Tokyo’s relationship with Pyongyang. As chief cabinet secretary to his predecessor, Shinzo Abe, Suga said in 2015 that Japan was open to talking with South Korea without conditions to resolve ongoing bilateral issues.

Despite such rhetoric, Japan has used diplomatic events to snub Korea. In June last year, when Abe hosted the G20 summit in Osaka, he held no bilateral summit with South Korean President Moon Jae-in on the side despite Moon’s reception to such a meeting prior to the event.

Japan has also used its global clout to reinforce its historically revisionist agenda around the world regarding atrocities it committed against its Asian neighbors in World War II.

Most recently, the country has been mounting an all-out campaign, reinforced by its foreign minister and chief cabinet secretary, to force Germany to remove a statue of a girl symbolizing Korean victims of wartime sexual slavery from a public site near the Japanese Embassy in Berlin.

Pressured by Tokyo, the borough of Mitte in Berlin last week ordered the statue be removed by organizers lest it is forcibly dismantled after Wednesday.

Though it initially slammed Japan’s actions to take down the statue as conflicting with Tokyo’s sense of responsibility over the sexual slavery issue, Korea’s Foreign Ministry is refraining from escalating the issue into yet another diplomatic standoff with its neighbor.