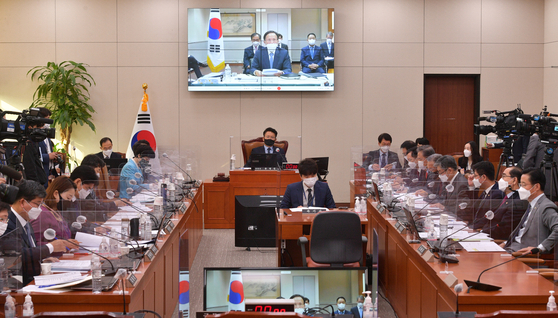 South Korean lawmakers at the National Assembly in western Seoul hold a parliamentary audit hearing with Seoul's ambassador to the United States, Lee Soo-hyuk, on Monday via a remote conference with the South Korean Embassy in Washington. [YONHAP]


The U.S. State Department on Tuesday said it was “extremely proud” of its 70-year alliance with South Korea, in response to doubt cast by the Korean ambassador to the United States on Monday about the perpetuity of the relationship.

In a remote parliamentary audit hearing on Monday, Ambassador Lee Soo-hyuk had told lawmakers that Korea’s choice of the United States as its primary ally for the next 70 years was not guaranteed, but rather contingent upon what he called “national interest.”

The comment was strikingly candid coming from Seoul’s top envoy to its closest ally, laying bare a rift that has been growing between the two countries in recent years — owed in no small part to the treatment shown to Seoul by U.S. President Donald Trump.

Lee’s frankness apparently raised alarms in Washington as well, prompting the State Department to respond with a statement to Radio Free Asia (RFA) stressing it was “extremely proud” of the alliance and “all it has done for the sake of peace and prosperity” for both countries. The statement came in response to RFA asking about Lee's comments, according to the U.S. government-funded broadcaster.

“Based on our shared values, our two countries are constantly working together as allies and friends to ensure that our alliance is able to meet new and emerging challenges in the region, including those that would seek to undermine the rules-based international order,” the department said.

In an apparent attempt to defuse the controversy, a Korean Foreign Ministry spokesman on Tuesday said the South Korea-U.S. alliance "remains firm" and that the two countries will closely consult on all matters going forward.

Lee’s remarks on Monday were not the first time the ambassador has openly questioned the future of the Korea-U.S. alliance. In June, he told Korean reporters in Washington that South Korea was free to choose between the United States and China as allies and would not be forced to align itself toward one side.

The military alliance between South Korea and the United States, forged in the 1950-53 Korean War, has been strained by a number of unresolved bilateral issues.

Trump has repeatedly questioned the necessity of a permanent U.S. military presence in South Korea, while demanding a major hike to Seoul’s financial contribution for the upkeep of the 28,500-strong U.S. Forces Korea.

The allies have also diverged in their approach to North Korea, with South Korea’s Moon Jae-in administration pushing for a more flexible approach to economic sanctions toward the regime that has seen pushback from Washington.
Without intervening directly in the matter, Washington applied pressure on South Korea that ultimately forced Seoul to step back from canceling a military intelligence sharing pact with Tokyo.

Seoul has also been uncomfortable with the United States’ stance toward its ongoing diplomatic spat with Tokyo surrounding the Korean Supreme Court ruling on wartime forced labor and ensuing economic retaliation by Japan.

With the U.S.-China rivalry continuing to heat up, Korea also finds itself torn on whether to commit further to U.S. efforts to build an envisioned multilateral security pact in the region, owing to its heavy economic reliance on Beijing.

One looming concern for Seoul is that should it enlist further in U.S. efforts to contain China, Beijing may opt to retaliate economically toward South Korea — similarly to how it acted following the deployment of the U.S.-made terminal high altitude area defense (Thaad) batteries to South Korea in 2016.