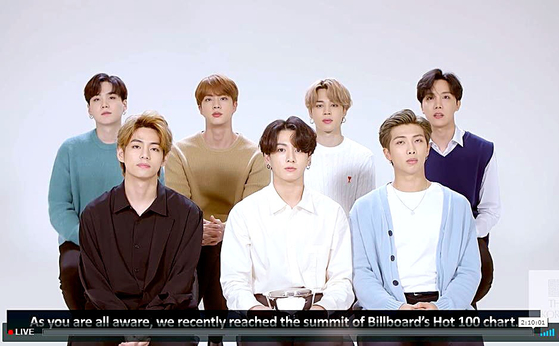 A screen capture of BTS receiving the 2020 Van Fleet Award on Oct. 7. [YONHAP]

China’s state-run Global Times has withdrawn an online article claiming K-pop boy band BTS enraged Chinese netizens by a recent acceptance speech for an award — shortly after Beijing’s Foreign Ministry called on the nation to “look forward to the future.”

An article on the outlet’s English website, however, remained uploaded Tuesday under the headline, “BTS hurts feelings of Chinese netizens and fans during speech on the Korean War.” As of Tuesday evening, there were 12 comments below the article, all in English, and mostly defending BTS.

The seven-member K-pop phenomenon made headlines in Korea Monday when local outlets went to town with stories that the group was coming under fire from China for comments that BTS leader RM made as he and his members were receiving a prestigious award during a virtual awards ceremony.

BTS was given the Van Fleet Award by The Korea Society on Oct. 7 for their contributions to improving South Korea-U.S. relations.

Each member took turns giving remarks during the acceptance speech. Some Chinese media outlets including the Global Times reported that RM’s remarks enraged the Chinese public as he spoke about the “sacrifices” that “our two nations shared together” in the 1950-53 Korean War, apparently referring to South Korea and the United States.

The Global Times reported in English that “many Chinese netizens pointed out that the speech plays up to U.S. netizens, but the country played the role of aggressor in the war.”

The following are RM’s full remarks during the speech, made in English: “The Korea Society 2020 Gala is especially meaningful as this year marks the 70th anniversary of the Korean War. We will always remember the history of pain that our two nations shared together, and the sacrifices of countless men and women.

“After 70 years, the world we’re living in is much closer than before. Boundaries in many aspects are getting more blurred. As members of the global community, we should build a deeper understanding and solidarity to be happier together. In pursuit of this cause, BTS will always remind ourselves of the meaning of the Van Fleet Award and keep doing our best in all that we do. Thank you very much.”

No other major Chinese news outlet appeared to have reported on the incident by Tuesday evening — at least from the angle that the boy band’s speech “angered” the Chinese public. The People’s Daily, which is China’s largest newspaper and official mouthpiece of the Chinese Communist Party’s Central Committee, covered the Foreign Ministry spokesman’s remarks, which were relayed Monday.

The JoongAng Ilbo’s Beijing correspondent reported that attacks on BTS from Chinese netizens had “heated up” the Chinese internet on Sunday and Monday, but that on Tuesday, they fizzled out almost entirely, apparently due to the Chinese diplomat’s statement.

During a regular press briefing Monday, Zhao Lijian, spokesperson for the Chinese Foreign Ministry, was asked about BTS’s acceptance speech from a reporter, who said the remarks seemed to have “triggered controversy with some Chinese saying online that it’s a matter of national dignity and calling for a boycott of the products the band endorses.”

When asked by the reporter whether the Chinese Foreign Ministry thought of it as a matter of national dignity, Zhao replied, “I have noted relevant reports as well as the reactions from the Chinese people online,” adding, “I want to say that we all should learn lessons from history and look forward to the future, hold dear peace and strengthen friendship.”

In the aftermath of the controversy, Korean media reported Tuesday that Samsung, Hyundai Motor and Fila have all distanced themselves from BTS by pulling down advertisements and references to BTS from their Chinese websites and media accounts.

BY YOU SANG-CHUL, LEE SUNG-EUN   [lee.sungeun@joongang.co.kr]