Can the Vixtorm's young setter lead the team to KOVO glory?

Can the Vixtorm's young setter lead the team to KOVO glory? 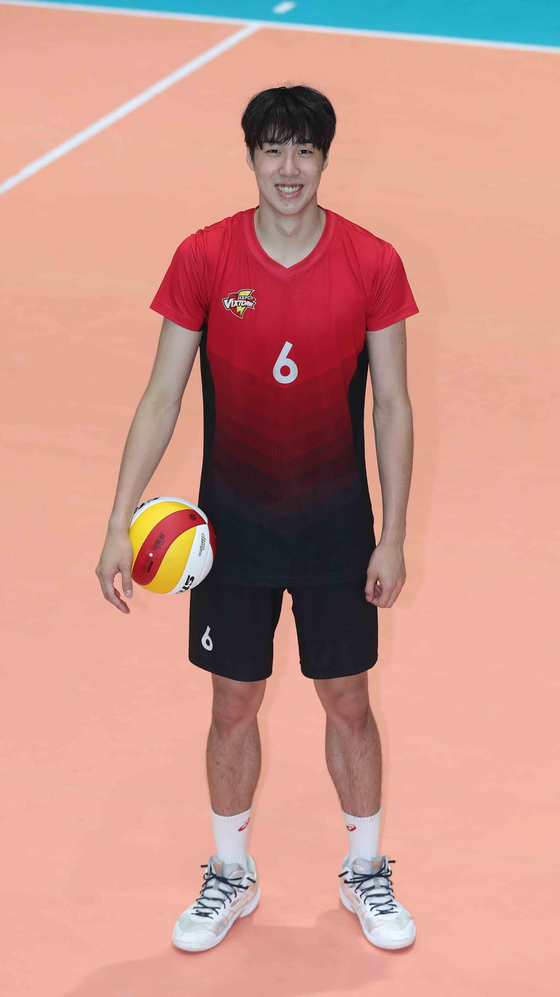 
With the Korean Volleyball Federation (KOVO) finally starting its 2020-21 season on Friday, Suwon Kepco Vixtorm are ready to make an upset.

Having won the KOVO Cup, a preseason tournament, on Aug. 29, Vixtorm quickly rose as the team to beat this season. Their victory came as quite a surprise as Vixtorm have been considered one of the weakest teams in the KOVO, finishing dead last in the regular season standings for the last two seasons.

One thing that makes this year's Vixtorm squad stand out — quite literally — is their height.

Among the active setters in the KOVO, Vixtorm’s Kim Myeong-gwan is the tallest, standing at 1.95 meters (6.4 feet) tall. The average height of the rest of the squad, aside from the libero, is 1.987 meters tall. Two players, Kyle Russel and Ahn Yo-han, are over 2 meters tall and four players — Park Chul-woo, Cho Geun-ho, Lee Si-mon and Kim — are over 1.95 meters tall.

“Last season, our blocking per set was two,” said head coach Jang Byoung-chul. “But during the Cup tournament, we had more than 10 in each of the games.”

The key to that success may well be Kim. As a setter, Kim is considered tall in the KOVO and Jang has been actively taking advantage of the tall setter.

“Not just for our team, but to improve the competitiveness of Korean volleyball internationally, Myeong-gwan has to improve,” Jang said.

Kim started volleyball when he was in the third grade of elementary school, where he started out as striker. He switched his position to setter in middle school because he wasn't tall enough.

“Since I wasn’t growing any taller, I thought about quitting volleyball in middle school,” Kim said. “During the first grade in high school, I was only 1.73 meters tall.”

Kim's height concerns didn't last for long. In the winter of his first year in high school he shot up 15 centimeters (5.9 inches) and suddenly became 1.90 meters tall.

“Although I didn’t go through any growing pain, I couldn’t find balance in my body,” Kim said. “After I sprinted, my legs were shaking.”

Using his height as an advantage, Kim became known for his blocks while attending Kyonggi University.

Following quite a college career, Kim joined Vixtorm last season as first pick in the rookie draft. Although he was drafted first, he wasn’t able to get right into the Vixtorm’s starting lineup as their starting setter was Lee Ho-geon, who now plays for the Seoul Woori Card Wibee.

During his rookie season, Kim slowly increased his playing time as a backup setter. However, since he had such limited time playing with the Vixtorm’s spikers, there were mistakes.

“Last year, I was rushing for a start,” Kim said. “It was very disappointing.”

As Vixtorm lost Lee, head coach Jang chose Kim as the club’s new starting setter. To do so, Jang made sure coach Kwon Young-min gave Kim his full attention. Jang assigned Kwon as Kim’s main coach so Kim could use his height as an advantage.

Kwon made sure to teach Kim the basics. Through tough training sessions, Kim has finally proved his competitiveness by helping the Vixtorm win the KOVO Cup. Along with the team’s victory, Kim also received the rising star award.

“During the tournament, I talked to my parents every day,” Kim said. “They were worried in the group matches but when we won, their voices got brighter. I felt proud and gained confidence.”

While Kim was pleased with the achievement, Kwon still thinks the young setter has room for improvement.

When it comes to Kim’s favorite player, it’s Incheon Korean Air Jumbos setter Han Seon-soo, who is quick and makes accurate tosses. Kim pointed out that those are the areas that he wants to improve on.

“I’m learning a lot from former setters, coaches Kwon Young-min and Kang Min-woong,” Kim said. “Since I started out as a setter later than others, I still have a lot of areas to improve on.”

Despite winning the KOVO Cup, the Vixtorm still aren't considered the likely team to win the regular season, but that doesn't mean they don't have the potential to offer a serious surprise this year.

A lot of that potential success comes down to Kim.

“I believe that I need to [fulfill my role] properly,” Kim said. “I’ll trust our spikers and play with confidence. I really want to play in the postseason.”

The Vixtorm will start their season with their opening game against the Daejeon Samsung Fire & Marine Insurance Bluefangs at Suwon Gymnasium, starting at 7 p.m.