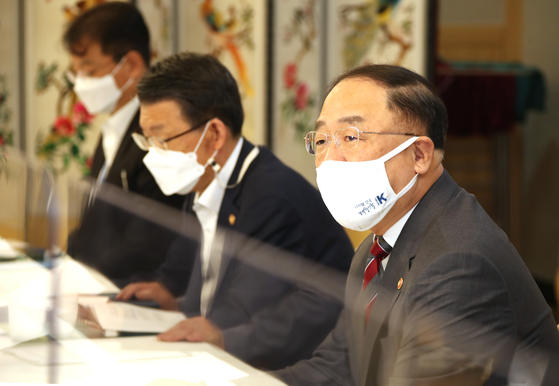 
Finance Minister Hong Nam-ki said Wednesday that he understands the pain of jeonse tenants, while acknowledging the continuing rise of prices for the long-term rental deposits as offers have nearly disappeared in the market.

“I heavily accept the difficulties of people that are trying to find new jeonse offers,” Hong said during a government meeting on real estate issues on Wednesday. “[The government] will closely look into the reasons behind the rising jeonse prices and discuss [a response].”

Unlike the market for buying and selling apartments, Hong noted that the long-term rental prices are continuously rising.

The finance minister has recently faced ridicule over the jeonse contract for the apartment he lives in in Mapo District, western Seoul, which expires in January.

During a National Assembly audit on Oct. 8, People Power Party lawmaker Yun Hee-suk said she hopes that Hong would have luck finding a jeonse apartment, noting that there are only three jeonse offers in the Mapo area where he currently resides, and that jeonse prices in his neighborhood have risen by an average of 250 million won ($218,000).

Hong until recently owned two apartments, one of which was located in Euiwang, Gyeonggi. The other was in Sejong.

However, he sold his Gyeonggi apartment in July on orders from the Blue House and Prime Minister Chung Sye-kyun.

The Blue House in December ordered its employees to sell all but one of their apartments to demonstrate the Moon Jae-in government’s commitment to stabilizing the housing market.

While Hong owns another apartment in Sejong, it's still under construction, and isn't scheduled to be completed until August 2021.

However, the finance minister said the three new laws to protect renters — including automatic extensions for another two years after the initial two years expire and limiting landlords from raising the rent more than 5 percent during contract renewals — passed the National Assembly with the full support of the ruling Democratic Party appear to be working.

“Since the law protecting tenants on automatic renewal of [rent] contracts was enacted in September, the public institution’s jeonse loan guarantee renewal has reached this year’s highest, indicating that renewals on rent contracts are rising,” Hong said.

In Seoul, the renewals of the jeonse loan contract guarantees have risen from an average of 55 percent between January and August to an average of 60.4 percent.

“While we still have to closely monitor [the market] to make a more accurate judgement, if the legislation protecting tenants settles, housing stability of existing tenants will expand,” Hong said.

He also said the housing market has been stabilizing as housing purchases through loans have been shrinking.

“Between May and June, 50 percent of the total [apartment] transactions made in Seoul designated as speculative were gap investments,” Hong said. “As of September it has dropped to 20 percent.”

He said this shows that so-called gap investments, which aren’t bought so that the investor can actually live in them, are being stomped out.

Gap investments have been considered one of the key reasons behind the spike in apartment prices. By buying an apartment that already has a jeonse rent deposit, the buyer only pays for the remaining amount. This allows the buyer to own the apartment without having to immediately pay the full amount, while inheriting the jeonse deposit from the previous landlord.

During Wednesday's meeting, Finance Minister Hong also said the government will ease the conditions for newlyweds to purchase special apartments supplied by the government, with prices that are cheaper than other apartments in the same neighborhood.

Since the Moon government took office in May 2017, the government has released 23 real estate measures.