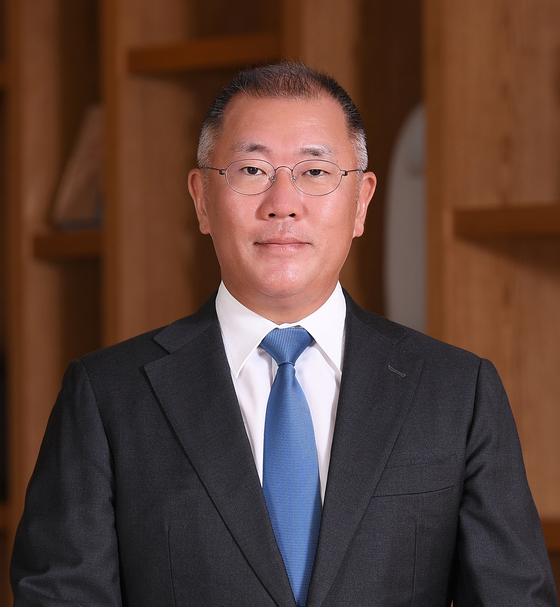 Chung was appointed to chairman in a board of directors meeting on Wednesday. He is the third-generation leader of the group, following in the footsteps of his father Chung Mong-koo and grandfather Chung Ju-yung.

Wednesday's handover marks the first time in 20 years that a new chairman has been appointed for Korea’s largest automotive company.

In his inauguration remarks, Chung suggested that customers, humanity, future and social contribution are the four words that sum up his future vision for the group.

"For the free movement and prosperity of humanity, we will develop the world's most innovative and reliable autonomous driving technology, offering entirely new mobility experiences,” he said.

In the past few years, Chung has been spearheading Hyundai Motor Group’s transformation from an automaker into a “future mobility solution provider,” exploring fields like hydrogen fuel cells, robotics and urban air transportation.

"Our world-class hydrogen fuel cell technology will be used not only in automobiles, but also in various fields as an eco-friendly energy solution for the future of humanity," said Chung.

"We will also realize the future of our imagination through robotics, Urban Air Mobility (UAM), smart city and other innovations. These groundbreaking advancements will offer a higher plane of life experience for humanity."

Having joined the company in 1999, Chung has gradually taken the helm since his promotion from vice chairman to executive vice chairman, a post that’s never existed before, back in September 2018.

In March, 49-year-old Chung was approved by Hyundai Motor’s board of directors to serve as the board’s chairman, expanding his managerial power at the auto company that oversees 12 listed subsidiaries.

Former Chairman Chung Mong-koo was named honorary chairman on Wednesday. The elder Chung was hospitalized due to an infection in his intestine in July and is still receiving medical care.

Under Chung Mong-koo’s 20-year leadership, Hyundai Motor Group merged with Kia Motors during the economic crisis in the late 1990s, and survived the global financial crisis in 2008.