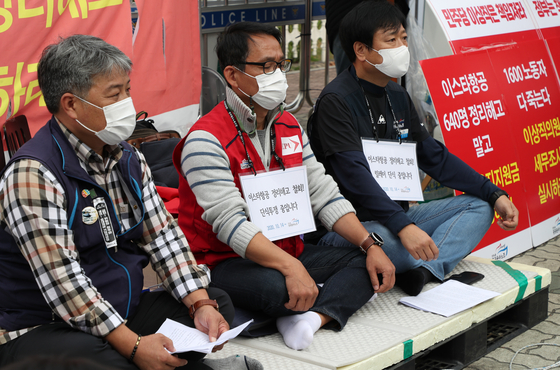 
Eastar Jet's pilots union kicked off a hunger strike Wednesday to protest the budget airline’s laying off of more than 600 employees.


The union held a press event in front of the National Assembly in western Seoul on Wednesday demanding Eastar Jet founder Lee Sang-jik and the government take responsibility for the layoffs.

Lee, who headed the state-run Korea SMEs and Startups Agency from 2018 through January and is a lawmaker in the National Assembly, left the ruling Democratic Party in September over criticism from the pilots union about bad management.

“When he left the party on Sept. 24, lawmaker Lee Sang-jik said in public that he would return to the party after saving the jobs at Eastar Jet,” said the union in a statement. “Ruling party leader Lee Nak-yon also said he will keep an eye on the future responses [of Eastar Jet’s management], but is doing nothing about the mass layoffs and company bankruptcy.”

Eastar Jet says it has been trying to sell the company since July, when bigger budget carrier Jeju Air walked away from acquiring it. But there hasn’t been any progress for the last three months, according to the pilot union.

Eastar Jet is left with around 590 workers following the latest layoffs, and the carrier plans more layoffs to get to around 400 employees.

Other low-cost carriers (LCCs) are also suffering from the global pandemic.

Jeju Air is applying for an industry stabilization fund, which has been designed to help key industries overcome the crisis and protect jobs at risk from Covid-19.

An evaluation by a committee on whether LCCs are eligible for the fund is scheduled for Thursday.

The basic conditions for applying for the fund is that a company should have at least 300 employees with at least 500 billion won ($436 million) in outstanding loans.

Jeju Air and Air Busan are the only budget airlines that meet those conditions.

Air Busan has not applied for the fund.

Korean Air Lines is also considering applying for the fund. It could apply this month.

So far, Asiana Airlines is the only airline that has been confirmed to receive the fund. It will receive 2.4 trillion won following a failed acquisition deal with HDC Hyundai Development Company in September.

Probing into suspicious recruitments at Eastar