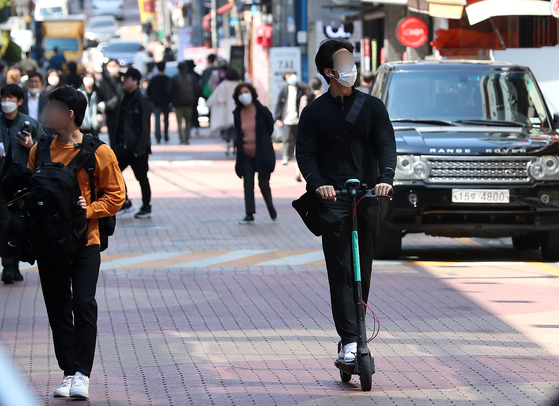 
Safety concerns are mounting over the use of electric scooters as the number of accidents involving the new mobility solution has been growing sharply.

Roughly 466 accidents were reported during the first half of the year.

Accidents are also getting more serious. The average insurance payout per accident was about 59.3 million won in 2017 but reached 143.8 million won last year.

Mobility companies say the actual number of accidents is likely to be much higher.

The statistics by the Korea Insurance Development Institute and Korea Trucking Association only include the accidents between electric scooters and vehicles that have been reported to the association. It doesn’t include incidents where the two sides have reached an agreement at the scene without reporting it to their insurance company.

The recent increase in the number of accidents is largely due to the sudden popularity of electric scooters.

Including electric scooters owned by individuals, the number is expected to be much higher.

“With the recent boom in electric scooters after the Covid-19 outbreak, the risk of accident has been increasing sharply,” said ruling Democratic Party lawmaker Cheon Jun-ho. “The Ministry of Land, Infrastructure and Transport must come up with measures that can protect not only the riders but also pedestrians."

Until recently, people aged 16 or over who own a regular driver’s license or motorcycle driver's license were allowed to drive scooters.

In Korea, 80 percent of all bike paths are also used by pedestrians. If the law takes effect, the number of accidents between electric scooter drivers and pedestrians is likely to grow.

“Personal mobility is gaining global popularity as a new means of transportation,” said Shin Hui-cheol, a researcher at The Korea Transport Institute. “In order to expand the industry, [the government] should solve the safety and parking problems, as well as improve the insurance system.”