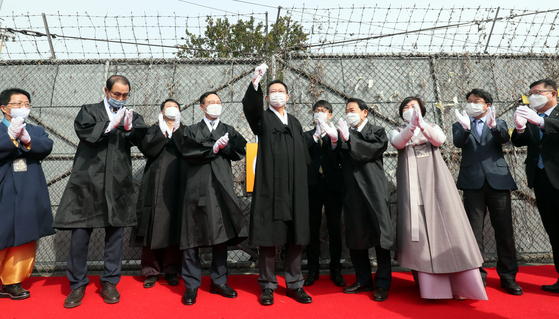 The main gate of the U.S. Forces Korea (USFK) Camp Market base in Bupyeong, Incheon, is opened to the public Wednesday for the first time in over 81 years, following its return to South Korea last year. Incheon's municipal government held a ceremony attended by some 100 dignitaries to mark the public opening of a 93,000-square-meter (23-acre) area that previously housed a baseball field, swimming pool and a theater. Parts of the 440,000-square-meter Camp Market site were made off-limits by the Japanese imperial army in 1939. The public is now allowed to freely enter the former Camp Market area from 9 a.m. to 5 p.m. every day. [YONHAP]

Koreans affiliated with USFK are first in nation to get vaccines