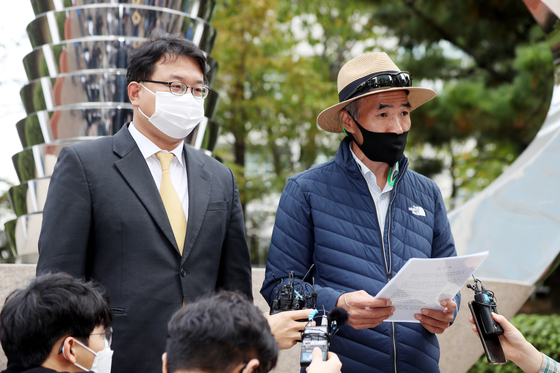 Lee Rae-jin, elder brother of a fisheries official shot and killed by North Korea last month, holds a press conference in front of the Korea Coast Guard office in Incheon on Wednesday. Lee said he requested the agency to release its investigation reports to him. [YONHAP]


The family of a fisheries official killed by North Korea last month filed a request to the Coast Guard Wednesday to see detailed records of its investigation, and challenged the agency’s conclusion that the victim was defecting to the North.

Lee Rae-jin, elder brother of the victim, who was an employee of the Ministry of Oceans and Fisheries’ West Sea Fisheries Management Service, held a press conference Wednesday outside the Korea Coast Guard office in Incheon, demanding more information about his brother's demise.

“I am submitting an application for information disclosure to find out why the Coast Guard announced that my brother was defecting to the North, although crew members aboard the ship Mugunghwa 10 all said they saw no possibility of his defection,” Lee said. “I want the Coast Guard to release their statements within 10 days.”

The official went missing on Sept. 21 in waters south of the inter-Korean maritime border in the Yellow Sea while he was aboard the Mugunghwa 10, a government boat guiding small fishing boats. He was shot and killed by North Korean soldiers north of the border the next day. How and why Lee ended up in the North remains a mystery, but the Coast Guard announced on Sept. 29 that he tried to defect, which his family adamantly denies.

Lee also challenged the Coast Guard’s conclusion that his brother swam 38 kilometers (24 miles) against the current to reach the North. He said he no longer trusts the Coast Guard.

On Sept. 29, the Coast Guard announced that the victim clearly made efforts to move northward against southward currents in order to defect to North Korea. At the time, the agency said scientific studies showed that Lee, if he was accidentally set adrift, should have floated in a southwestern direction instead of being shot and killed in North Korean waters northwest of where he went missing.

The agency said it also conducted an experiment by dropping a dummy into the sea to estimate Lee’s course. “Without man-made efforts, it is impossible for him to have actually drifted to the North,” a Coast Guard official said at the time.

The JoongAng Ilbo, however, learned later that the experiment actually failed. Rep. An Byung-gil of the opposition People Power Party said last week that the Coast Guard initially planned four experiments using dummies, but only conducted one. The Coast Guard lost track of the first dummy within an hour on Sept. 26, and canceled the remaining three, An said.

The Coast Guard still said the experiment was proof that the official was defecting to the North.

At the press conference on Wednesday, the victim’s brother also showed a letter President Moon Jae-in sent to his nephew, the victim’s teenage son, who sent a two-page hand-written letter to Moon demanding answers from the government about his father’s death. 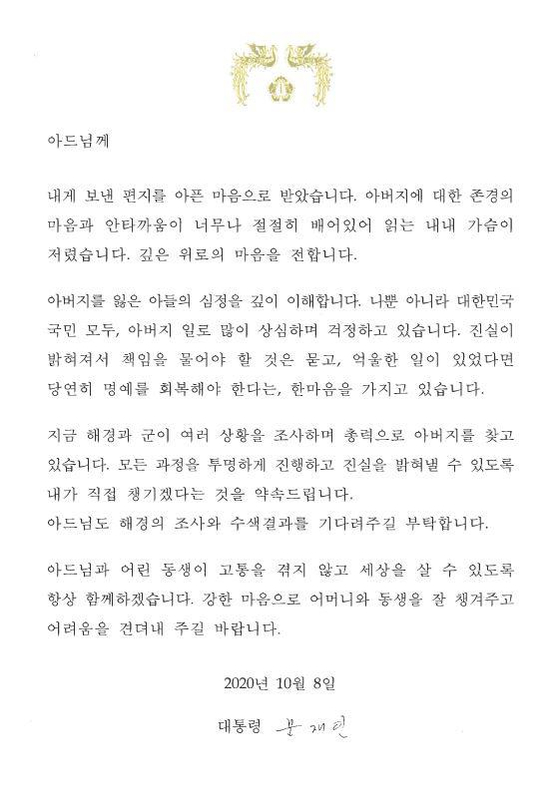 President Moon Jae-in's letter to the son of the fisheries official killed by the North is made public by Lee Rae-jin, elder brother of the victim. [YONHAP]


Despite some media reports criticizing Moon for lacking sensitivity, the family is satisfied with the letter, the elder brother said.

Earlier this week, opposition politicians and some media criticized Moon for having sent an unsatisfactory reply to the boy. They said the letter was merely a printout of Moon’s earlier message bearing an electronic signature, although the boy sent an emotional hand-written letter to the president.

On Wednesday, presidential spokesman Kang Min-seok said the letter was created based on the standard protocol.

He said Moon wrote a draft by hand and asked a Blue House aide to type and print it in an official stationary. Kang said all presidential letters, including those sent to world leaders, are created in the same way, dismissing reports that Moon was callous toward the victim’s family.