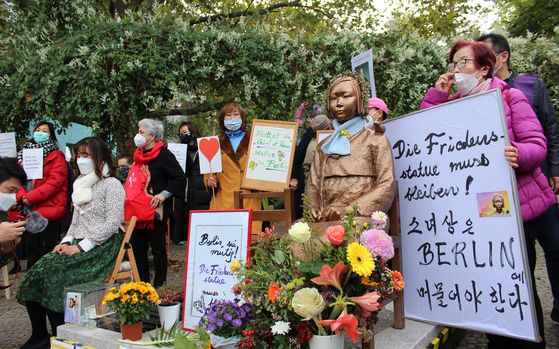 Korean activists and expats on Tuesday protest near a "comfort woman" statue in Berlin, demanding the Mitte District rescind its order to remove the installation from a public street. [YONHAP]

A district office in Berlin walked back its statement demanding that a civic group remove a statue symbolizing Korean victims of Japan’s wartime sexual slavery, saying it could remain on a public street pending a court decision.

A press release uploaded to the official website of Mitte District Tuesday stated that the so-called Statue of Peace will be allowed to stay in place until a local court hands down a verdict on a petition filed by Korea Verband, a Germany-based civic group composed mainly of Korean nationals.

The group asked a Berlin court earlier this week to suspend the Mitte District’s order to remove the statue by Wednesday.

In the press release, Mitte District Mayor Stephan von Dassel vowed to review the controversial issue of so-called "comfort women" from both Korean and Japanese perspectives, and also from that of the district, for a sufficient amount of time before reaching a conclusion.

Von Dassel continued that he wants to reach a compromise that fairly incorporates both Korea Verband and Japan’s interests, adding that the statue will hopefully be erected in a way that “everyone can coexist.”

The mayor stressed that Mitte opposes all forms of armed clashes and sexual violence against women, regardless of time, place and reason.

The diplomatic dustup first emerged late last month when the Mitte District allowed Korea Verband to install a comfort woman statue on a public street, only to rescind its approval several days later, apparently under pressure from Tokyo.

On Oct. 7, the Mitte District gave Korea Verband a week to remove the statue, saying the inscriptions on a plaque that goes with the statue hadn’t been reported to authorities earlier, and was now creating tensions between Germany and Japan.

Korea Verband refused to back down, saying Mitte authorities hadn’t asked the group for the inscriptions when they requested permission to erect the statue, and adding there was “nothing wrong” with the message either, which elaborates on how Japan forcibly sent many girls and women in Korea to frontline brothels during World War II to provide sex for Japanese soldiers.

Some 300 people, including Korea Verband activists and Korean expats living in Berlin, gathered near the statue Tuesday and marched toward the Mitte District’s office, calling on authorities to rescind their decision to remove it.

Korea’s Foreign Ministry has so far kept a low public profile on the issue, apparently to avoid driving another wedge between Japan while they’re already bickering over several other issues. But some diplomatic sources say Korea and Japan appear to be pressuring Germany behind the scenes.

Korean Foreign Ministry deputy spokesman Lee Jae-woong said earlier this week in a regular press briefing that it was Seoul’s “basic stance” that both the Korean and Japanese governments should not interfere diplomatically in a “voluntary movement” by a civic group.

Yet in the same breath, Lee said Japan’s “recent words and actions go against the spirit of the sense of responsibility, apology and self-reflection” it had previously shown on the comfort women issue.