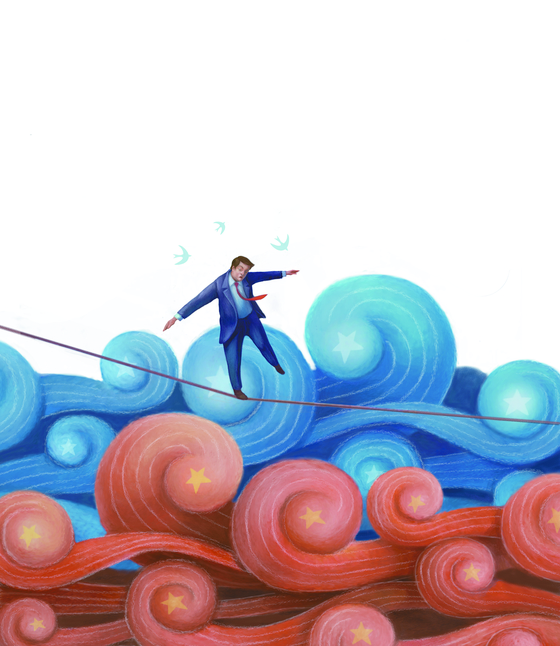 Diplomacy pundits often liken South Korea to a prawn squeezed between two whales: the United States and China. Korean diplomats see it differently. “We’re not prawns anymore. We’re at least dolphins,” they quip. But in essence, what difference does it make?

The Sino-U.S. confrontation is expected to last for at least 30 more years. The international order that enabled Korea’s success is being dismantled. We are in the early stages of a war that will determine the fate of our future generation — a multi-faceted war stretching beyond the military front to the economy to outer space. Washington and Beijing have been pressuring Korea to take their side, but Seoul has avoided irking either of the two. Such an evasive, opportunistic reaction can provoke both America and China.

Can we really keep sitting on the fence? What’s at stake? Do inter-Korean ties prevail over everything? We must answer these questions, so 30 years from now we can say we made the right decision.


Sitting on the fence in the U.S.-China conflict won’t work 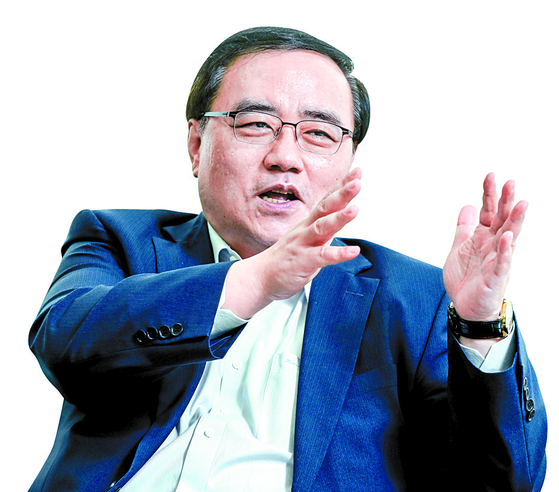 
Prof. Kim Sung-han, dean of the Graduate School of International Studies at Korea University, defines Washington’s China policy as “the 21st-century containment strategy.” In the field of advanced technology, in particular, sitting on the fence between the United States and China will not be acceptable. “If the United States thinks Korea can betray it, it could exclude Korea as it draws up a military plan to confront China,” he said.


For how long will the United States and China continue to fight?

A. It is the start of a 30-year war, spanning the terms of six Korean presidents.

What would a full-scale war between the two powers look like?

As China continues to narrow the military gap, the United States is expanding its counterstrategy beyond the Army, Navy and Air Force to outer space and cyberspace. The frontlines will be drawn near the South China Sea, Taiwan Strait and Southeast Asia. On the economic front […] the ultimate winner here will be whoever leads the race in high technology, not in consumer goods, which already has a high degree of global interdependence. For its part, China is going full-bore on its Made in China 2025 policy.

Does that mean Korea faces a dilemma in the advanced technology sector?

That’s right. Korea will have to make a strategic decision. It cannot hesitate between the two any longer.

What happens if Korea dilly-dallies?

When the United States maps out a new global value chain, it may put Korea in a disadvantageous position. Washington’s China policy can be summed up as 21st-century containment. […] The United States will try to forge alliances with other countries in the advanced technology field to prevent China from threatening its dominance in the fourth industrial revolution.

Who will win the battle?

If both countries rally their allies and friends, the United States will win.

The Moon Jae-in administration puts top priority on North Korea. Is the tail wagging the dog when we prioritize the North Korea issue over the United States and China?

Yes. Even though North Korea is the tail, the Moon administration regards its relations with the United States and China as the tail. But that does not solve the problem. Washington will send an ultimatum to Pyongyang, asking it to choose between giving up nuclear weapons and siding with the United States, or between keeping the nuclear weapons and siding with China. Washington will then ask Seoul to choose a side — the United States or North Korea and China. We are headed for this enormous dilemma.

If South Korea adopts a vague stance, how will the United States react?

If Washington is convinced of Seoul’s betrayal at a critical moment, it will reduce South Korea’s presence in its diplomatic strategies. If Trump gets reelected, he could sideline South Korea while redesigning his containment strategy against China — starting with withdrawing American troops from the peninsula.

How should we prepare for such a scenario?

In the fields of semiconductors and batteries, Samsung, SK and LG could offer us a lifeline. We must play a major role in the South-U.S. advanced technology alliance so that Washington doesn’t pull its troops.

The Moon administration also knows that our alliance with the United States is more important than our relations with China.

Just because Seoul sets Washington as its best partner doesn’t mean Beijing should be its adversary. Seoul must regard Beijing as its second partner and work towards managing the bilateral relationship. At the same time, our government officials must not often raise the issue of choosing between Washington and Beijing. As we already chose the United States as an ally, it is not the time to change it.

Could we ever have to change our choice within the next 30 years?

Possibly. Washington could screw up big time some day, and there’s no such thing as a permanent alliance. But when looking at variables such as free democracy, America will prevail over China over the next three decades. China is yet a latent hegemon with huge challenges to overcome. 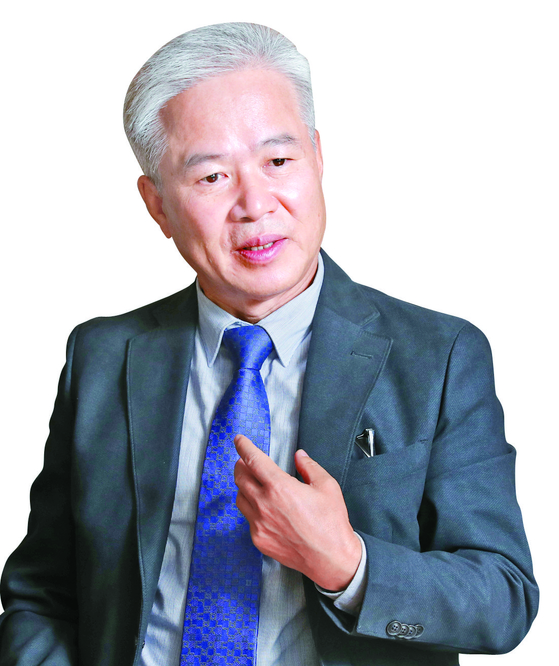 While comparing the U.S.-Soviet Cold War to the U.S.-China Second Cold War, Cho Byung-jae, who served as the first chancellor of the Korea National Diplomatic Academy in the Moon Jae-in administration, said the United States is different from China because it rattles its deeply rooted alliances even when China values diplomacy with neighboring countries after learning from the Soviet Union’s failure.
In an interview with the JoongAng Ilbo on Sept. 19, Cho stressed that avoiding sitting on the fence between the United States and China is not the solution.

For how long will the United States and China continue to fight?

A. At least for 30 years. The New Cold War between Washington and Beijing is just the beginning.

What would a full-scale war between the two powers look like?

Though military buildup competition is noticeable, underneath that is economic competition, and at the core there is a battle over science technology.

The United States won the first Cold War by marshalling its full domestic and international capacities. But ever since President Trump came into office, his leadership has torn the nation apart and undermined existing alliances. China, on the other hand, has learned from the Soviets’ failure.
Ever since Xi Jinping entered his second term as president, he has valued diplomacy with neighboring countries. If the United States maintains the status quo for four to five more years, it could be at a disadvantage.

What if Washington tries to use the South-U.S. alliance to contain China?

We do not get to choose which situations to be in; we are simply placed in them. There are limits to taking pre-emptive measures because we do not know what awaits us in the future.

The same goes for the hypothesis that Washington will try to use the South-U.S. alliance to contain China. The alliance is the foundation of our diplomacy. Nevertheless, that does not mean we should go out and reject opportunities presented by China. It’s more of a realistic strategy for us to see how things flow and adapt along the way.

Wouldn’t that create the impression Seoul is sitting on the fence?

The government’s role is finding a path that brings the least amount of pain to the people from an economic and national security standpoint. We should adhere to certain principles so as not to cause misunderstandings, but it is not clear what those principles are. One thing for sure is that whatever those principles are, adhering to them causes pain.

Are we willing to go through that risk? Avoiding sitting on the fence is not the solution. It’s best not to force ourselves into a situation where we have to endure pain.

Would the United States pull out its troops if it deems South Korea to be untrustworthy?

The reason why the United States is keeping forces here is because doing so helps its national interest. Unless the Korean Peninsula’s strategic environment drastically changes, the United States will keep a certain amount of troops here.

I do not believe Washington would try to withdraw troops to punish Seoul. From foreign exchange control to nuclear power plant development, there are a myriad of plugs Washington can pull off if it wants to punish Seoul. But the United States would not abuse that power.

Some critics say the Moon administration is acting pro-Chinese and anti-American.

[Critics say] the administration is anti-American, but not once has South Korea invited China to the Korean Peninsula peace process. It called in the United States, and China was sidelined. While the leaders of South and North Korea and the United States met five times between 2018 and 2019, there were five North-China summits. Beijing wants to exercise leverage via Pyongyang as it cannot stand idly when the situation is changing around the Korean Peninsula.

[The Moon administration] should have clarified to China that its interests would not be overlooked to the extent that President Xi has to meet Kim Jong-un so often.

How do you weigh between the administration’s inter-Korean policy and its U.S.-China policies?