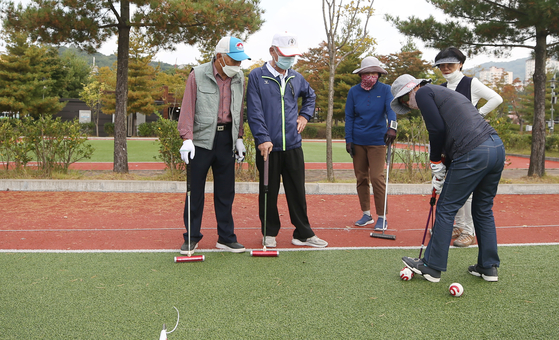 Older people play gateball in a park in Gwangju on Oct. 12. One out of every three people in Korea are expected to be 65 or older by 2040. [YONHAP]


In 20 years, one out of every three people in Korea will be 65 or older. Foreigners are expected to exceed 2 million, or 4.5 percent of the population, compared to only 3.3 percent now.

According to Statistics Korea on Thursday, people who are 65 or older by 2040 will account for 33.9 percent of the total population, compared to 15.7 percent now. They will number 17.2 million, double the current 8.13 million.

Foreign senior citizens living in Korea are expected to grow significantly from the current 90,000 to 560,000.

Among the 51.8 million people living in Korea this year, foreigners account for 3.3 percent, or 1.73 million, while the Korean population is 50 million, or 96.7 percent.

The number of people between the ages of 15 and 64 — defined as the economically active population — is expected to shrink.

Currently, people between the ages of 15 and 64 account for 71.5 percent of the population. By 2040, that demographic is expected to shrink to 55.6 percent.

On the growing foreign population, the statistics agency noted that there is a growing demand for government policies that help families whose parents include foreigners.

Currently, if you add immigrants or children of immigrants to the total number of foreigners in Korea, that number grows to 2.22 million, or 4.3 percent of the total population. That ratio is expected to increase to 6.9 percent, or 3.52 million, by 2040.

This is the first time the statistics agency created such a demographic category. Previously, immigrants and second-generation immigrants were categorized as Koreans.

The statistics agency noted that policies dealing with young children in multicultural homes are needed considering the growth in their numbers.

The number of children between the ages of six and 21 in such families is expected to nearly double in the next 20 years.

“The makeup of the domestic population is becoming more diversified and, as such, there is a growing demand for family and education policies dealing with multicultural families” said Kim Soo-young, director of the vital statistics division at the agency.