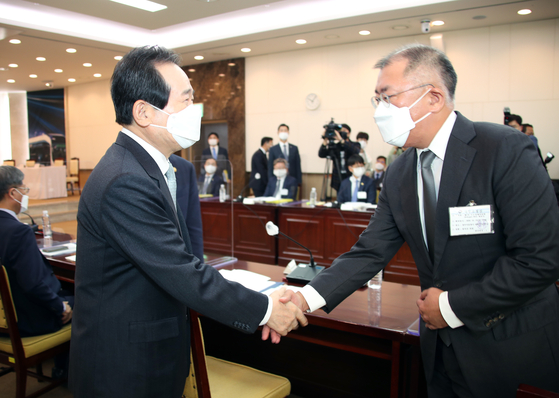 
Korea's foray into the so-called hydrogen economy got a boost Thursday, with the government's announcement that power companies will be required to source a certain amount of their electricity from hydrogen technology beginning in 2022.

The announcement did not specify what the minimum percentage of hydrogen-derived electricity will be required for the companies' energy portfolios. The government has also not yet determined whether to apply the new standards only to Korea Electric Power Corporation — the nation's sole power distributor — or to also include companies that generate electricity.

The move is aimed at accelerating the Moon Jae-in administration’s agenda of expanding the nation's reliance on hydrogen power. The new initiative will separate hydrogen from the country's existing renewable energy portfolio standards, which mandate that electricity generators, as well as distributors, obtain a minimum percentage of their power from renewables.

The government also announced plans to upgrade the system supplying liquefied natural gas used for manufacturing hydrogen, which it predicted will ultimately cut costs by 43 percent.

Power companies, including leading public power suppliers Korea Hydro and Nuclear Power and the Korea District Heating, along with private energy companies such as SK E&S, GS EPS and Posco Energy are required to generate 7 percent of their power from renewable energy as of this year, up from 2 percent in 2012. The government is targeting at raising the ratio to 10 percent by 2023.

The government, however, decided to apply a separate mandatory supply of hydrogen power from the mandatory renewable portfolio standard.

The government also has decided to simplify the distribution of liquefied natural gas in cutting costs.

The state-own Korea Gas Corporation, which has been the wholesaler, will be allowed to bypass the retailers which are private urban gas companies and directly supply the liquefied natural gas to hydrogen fuel manufacturers.

As the hydrogen economy is still seen as a blue ocean, or a large, unexplored potential market, Prime Minister Chung said Korea can take the lead as a “first mover.”

“Other countries, from the United States to the European Union, Japan and China, are speeding up their efforts competitively to secure the lead on hydrogen economy,” Chung said. “The government plans to support [this industry] through an 800 billion won [$699 million] budget next year on hydrogen mobility, hydrogen supply infrastructure, development of core hydrogen technologies and test bed cities.”

That’s a 35 percent increase compared to this year’s 587.9 billion won.

The Prime Minister emphasized that the transition from fossil fuels to renewable energy is unavoidable.

“It is an opportunity for our country, which lacks [natural] resources,” Chung said. “The Moon Jae-in government will take this opportunity in realizing the Green New Deal.”

Hyundai Motor Group’s new chairman Euisun Chung, who is a member of the committee, expressed optimism that Korea can take the lead in the global hydrogen race.

“While there are mounting problems [regarding hydrogen technologies], I am optimistic that we could move ahead of other countries more competitively,” Hyundai Motor Group Chairman Chung said.

It was the young chairman’s first official public event since he succeeded his father Chung Mong-koo as head of the country’s largest automotive group on Tuesday.

The 49-year-old has indicated a strong interest in developing hydrogen-related technologies.

Hyundai Motor on Thursday announced that it has signed an agreement with the government to create a "special purpose company," the Korea Hydrogen Energy Network, or Kohygen, which will be responsible for establishing and managing charging stations for commercial hydrogen-fueled vehicles.

The company will officially launch in February 2021.

Liquid-form charging stations reduce the volume of the hydrogen fuel 800-fold, compared to hydrogen's gas form, according to Hyundai.