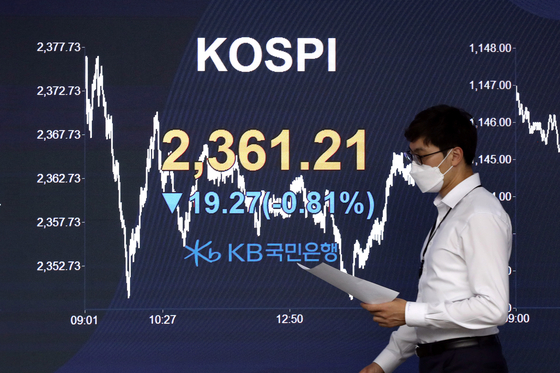 A screen shows the final figure for the Kospi in a trading room at KB Kookmin Bank in the financial district of Yeouido, western Seoul, on Thursday. [NEWS 1]


Stocks dipped for a third consecutive session Thursday as rising coronavirus infections and the deadlocked U.S. fiscal stimulus weighed heavily on local financial markets. The won rose against the dollar.

Investor sentiment worsened as Korea's new coronavirus cases rebounded to over 100 due mainly to a new cluster infection in the southeastern port city of Busan.

The country added 110 Covid-19 cases, including 95 local infections, raising the total caseload to 24,988, with the death toll reaching 439, according to the Korea Disease Control and Prevention Agency (KDCA).


The losses came after a weak start, tracking overnight Wall Street retreats that stemmed from doubts that U.S. lawmakers will be able to break a deadlock on passing a stimulus package anytime soon.


"The delay in the U.S. fiscal stimulus and the resurgence of Covid-19 infections seem to have reduced local investors' appetite for risks, in addition to the political uncertainties from the U.S. presidential election," Kiwoom Securities analyst Seo Sang-young said.

Big Hit Entertainment, the management agency of K-pop phenomenon BTS, fell 4.44 percent to 258,000 won on the first day of trading after it jumped by the daily limit of 30 percent as soon as the market opened.

The local currency closed at 1,143.2 won per dollar, down 3.7 won from the previous session's close.

Bonds, which move inversely to yields, finished mixed. The yield on three-year bonds fell 2 basis points to 0.881 percent, and the return on 10-year bonds remained unchanged as of yesterday at 0.72 percent.