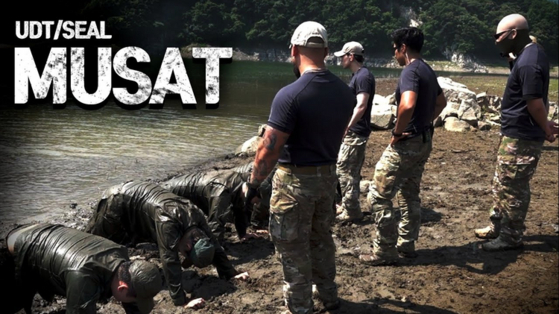 ’Fake Men“ instructors make recruits plant their heads on the ground while keeping their hands behind their back as part of training. [YOUTUBE]


Amid controversy over whether the YouTube military training program “Fake Men” is crossing the line between violent and vile, this week's episode has been suspended just two weeks after the premiere of the highly anticipated new season.

“Fake Men” is a parody of a terrestrial broadcaster MBC’s variety show “Real Men” (2013-2019), which features celebrities experiencing Korean military training. It sees YouTube celebrities undergo extreme military training and gained explosive popularity since its launch in July, accumulating 56 million views on YouTube. It is also the first-ever entertainment show in Korea to succeed as original YouTube content outside of TV broadcasting companies.

YouTube fitness channel Physical Gallery and assaulting tactics consulting company Musat collaborate on the show to recruit applicants looking for a challenge. The recruits take on a training program which Musat says is a simulation of the Underwater Demolition Team (UDT) program, usually taken by soldiers and police officers.

Thanks to YouTube’s less stringent standards for violent content compared to terrestrial broadcasters, the show presented tough training scenes that are deemed to be inappropriate for terrestrial television shows.

“It wasn’t fake, there weren’t any cuts, and none of that was acting,” Lieutenant Ken Rhee, who instructed the training for Season 1, said after the show ended. 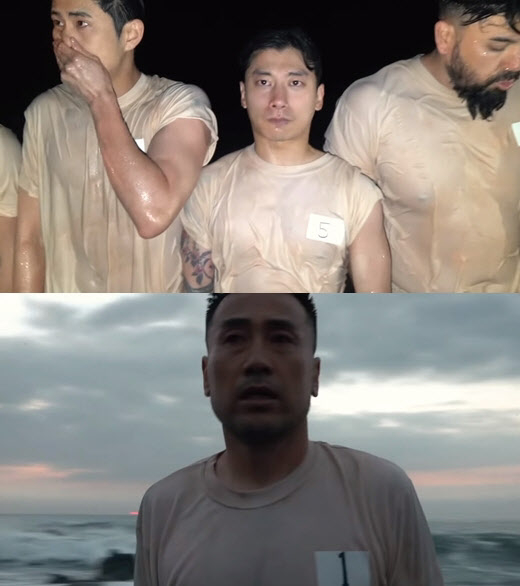 After every recruit in Season 1 quit the program on the first day, Season 2 featured some big-name sports stars including former national soccer team goalkeeper Kim Byung-ji and national short-track speed skater Kwak Yoon-gy. But despite the superior physical condition of the recruits in Season 2, all 14 failed to complete the first day due to the harshness of the training.

While some viewers comment the training is safe because the recruits can quit anytime they want and medical specialists are present throughout, others point out that the program portrays excessive physical and mental violence that is unnecessary, such as recruits being stomped on by instructors and being verbally abused. 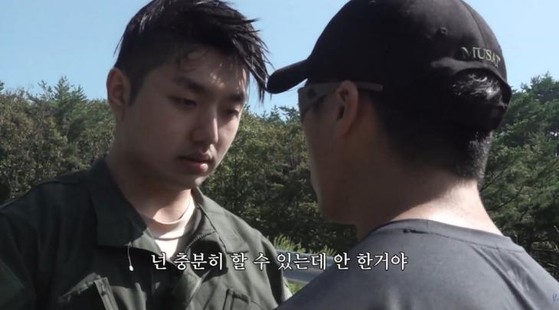 Singer Sam Kim appears in the second season of ’Fake Men“ as a recruit. [YOUTUBE]

“There are contrasting views on 'Fake Men,' whether it is military training content or sadistic content,” culture columnist Jung Duk-hyun said. "'Fake Men' is a program that aims to renew one's mind and change attitudes in life, but unlike Season 1, which combines humor with serious training, Season 2 tends to concentrate on the painful, intense training that is close to torture.”

Part of the show’s success is attributed to the recruits’ dogged spirit amid challenging training courses and their strong camaraderie, but also the humor within the show which distinguished it from a military documentary.

Season 1 created numerous memes on social media, while in contrast, the new season presents scenes that are far from funny, including recruits passing out, developing cellulitis, skin infections and even damaging their eyes. 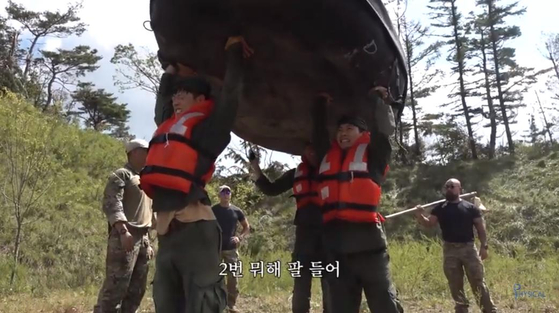 The most recent episode released on Sunday went viral for portraying multiple violent scenes. One of the controversial scenes sees Kwak being verbally abused by an instructor for not quitting a training exercise, “You just killed all of your teammates,” and “You made all of your teammates quit."

After a flood of negative comments on social media, Physical Gallery issued an apology a day after the fourth episode was released on YouTube.

“We apologize for making the viewers feel uncomfortable while watching our recent episode,” Physical Gallery wrote. “What we said to Kwak Yoon-gy was necessary because his actions could have severely hurt his teammates. We failed to make the flow smooth due to our lacking video editing skills. We will come up with better videos from now on.”

Critics point out that “Fake Men” has risks of promoting distorted masculinity by presenting the instructors who insult the trainees as manly, and those who endure the brutal physical and mental training as “real men."

“If the show wants to portray what it has intended, it needs to be more clear about the purpose of the program and tone down the language and actions. Physically torturing them for hours and saying ‘This training won’t kill you’ is way over the line,” columnist Jung added.

Season 1 instructor Rhee is also embroiled in multiple controversies after YouTuber Kim Young-ho, a former newspaper journalist, alleged that he faked his United Nations career and was found guilty of sexual harassment. Rhee denied the allegations about his career and admitted that he was found guilty of sexual harassment but claimed he had been wrongly convicted.

The next episode of the show will be released on Oct. 22.