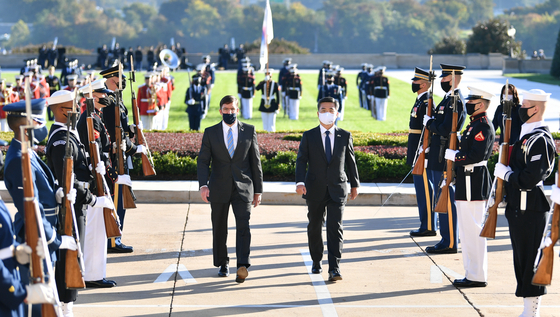 
Disagreement between South Korea and the United States over the timetable for the transfer of wartime operational control (Opcon) to Seoul boiled over at a key defense chiefs’ meeting Wednesday, exposing a growing rift between the allies over security issues.

Just hours before South Korean Minister of National Defense Suh Wook and U.S. Secretary of Defense Mark Esper were due to take part in the 52nd Security Consultative Meeting (SCM) in Washington that day, the Pentagon abruptly canceled a joint press conference that was supposed to be held after the meeting for reasons it did not specify.

The cancellation of the press event, which Seoul later said was owed to the Americans’ “internal issues,” was an ominous beginning to what turned out to be a disappointing meeting for Seoul, after its hopes to negotiate a clear timetable for Opcon transfer was shot down by U.S. officials opposed to rushing the transfer within the remainder of Korean President Moon Jae-in’s term.

As if to pre-empt Suh from bringing the matter up in the talks, Esper said at the beginning of the meeting that it would “take time” to undertake the assessments necessary to relinquish Opcon to Seoul, which would allow a South Korean four-star general to take command of allied forces on the peninsula in the event of a conflict.

“The Secretary committed to the provision of bridging capabilities, but noted the need first to understand [South Korean] acquisition plans in order to determine what specific capabilities are needed, and for how long,” read a joint communique released following the meeting.

A U.S. Defense Department official was far more blunt in his objection to the transfer per a prearranged schedule, telling the JoongAng Ilbo Wednesday that promising to transfer Opcon based on a fixed time frame would “endanger” U.S. service people and citizens.

That jibed with comments by U.S. Forces Korea Commander Gen. Robert Abrams, who said at a security forum last month that it would be difficult to complete Opcon transfer by the end of Moon’s term in May 2022 due to a lack of preparedness on the part of South Korea’s military.

Such reluctance from Washington has amplified suspicions in South Korea that the United States may have changed its mind about returning Opcon altogether, in light of growing security threats in the region stemming from a nuclear-armed North Korea and an aggressive China.

These concerns were amplified in August, when the United States postponed the assessment of Seoul’s full operational capability (FOC) — a key phase of the transfer process — with the scaling down of joint military exercises due to Covid-19. 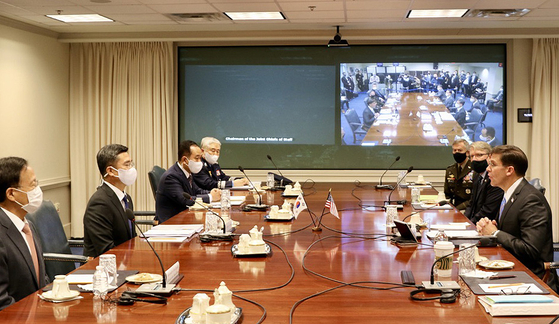 
The rift over Opcon has been further widened with Washington’s continued push to hike South Korea’s contribution to the upkeep of the approximately 28,500 U.S. troops on its soil.

Fueled primarily by the views of U.S. President Donald Trump, who on multiple occasions claimed Washington was being “ripped off” by allies like Korea, the United States has been negotiating raising Seoul’s financial contribution to the alliance far beyond the $870 million it paid last year.

With negotiations over a new Special Measures Agreement (SMA) beached since last year, Esper at the SCM warned that “lasting effects for Alliance readiness” could result “if an expeditious agreement” is not reached on SMA.

The secretary did not elaborate on what such effects entailed, or if they included a permanent reduction of U.S. troops. South Korea’s Defense Ministry denied such speculation, stating that the two defense chiefs reaffirmed their commitment to maintaining defense readiness.

The idea has nonetheless been raised by Esper himself on past occasions. In remarks at a forum in July, Esper said he preferred rotational deployments of U.S. troops into global theaters as opposed to permanent stationing as it would it give Washington “greater strategic flexibility” to handle regional security challenges.

Rotational deployments appear to be a major component of a concept security planners in the Trump administration, including Esper and his predecessor Jim Mattis, have pushed in recent years, called “dynamic force employment.”

Another key aspect of that security strategy involves delegating U.S. allies with greater military responsibilities to counter adversaries such as China and North Korea, something Esper hinted at by urging South Korea, “as well as NATO and other [U.S.] allies, to contribute more to our collective security.”

The U.S. State Department has been pushing for Seoul’s participation in an expanded form of the Quadrilateral Security Dialogue, or Quad, involving Australia, India and Japan, as part of a wider geopolitical strategy to contain China. Ideas have been floated in Washington of turning the security forum into a multinational alliance akin to NATO, though Seoul has been reluctant to jump on board due to its economic reliance on Beijing.

Saturday’s SCM was also a venue for discussions between the allies on North Korea’s increasingly formidable attack capabilities, unveiled with pomp at a grandiose military parade in Pyongyang last weekend.

Among the new weapons the regime exhibited that day were a new intercontinental ballistic missile (ICBM) that experts said could be the biggest of its kind in the world, a submarine-launched ballistic missile and various improved conventional missile-launching systems.

After in-depth talks on these activities, Suh and Esper reaffirmed allied cooperation towards the process of denuclearizing North Korea and called on Pyongyang to fulfill its commitments under its past agreements signed with Seoul and Washington.