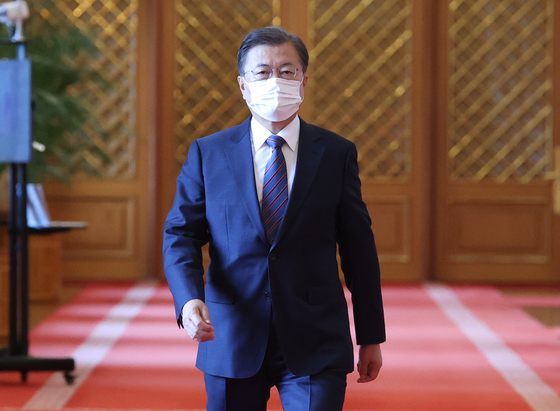 President Moon Jae-in on Friday attends a ceremony at the Blue House to receive credentials from new foreign ambassadors to Korea. Moon ordered the government to investigate their agencies' decision-making process to invest large funds in the troubled Optimus Asset Management. [YONHAP]


President Moon Jae-in on Friday ordered the ministries to investigate their affiliated agencies' decision making that led many of them to make dubious investments in a private equity fund suspected of large-scale fraud.

“Moon ordered the government ministries to conduct thorough investigations into the state-run institutions’ investments [in the Optimus Asset Management], separately from the ongoing probe by the prosecution,” said Kang Min-seok, spokesman of the Blue House.

In recent months, prosecutors have investigated allegations of fraud committed by the private equity firm, which solicited funds worth over 1.2 trillion won ($1 billion) from about 2,900 investors. In June, Optimus suspended withdrawals from its funds, locking up most of the customers’ money.

“Apart from the loss or gain from the state-run agencies’ investments, the president is telling the government to look into the agencies’ decision-making process to see if their investment decisions were made appropriately or not,” Kang said.

The Korea Communications Agency, a public institution under the Ministry of Science and ICT, invested 74.8 billion won into Optimus from June 2017 through March 2013. The agency invested funds comprising frequency allocation fees from mobile communication service providers.

Sources informed about the prosecution’s probes told the JoongAng Ilbo on Friday that the Seoul Central District Prosecutors’ Office has been looking into those investments.

Sources said the Korea Rural Community Corporation also invested 3 billion won in funds operated by Optimus. And Korea South-East Power had planned to invest 500 billion won in Optimus, two weeks after the hedge fund made a proposal. But the company canceled those plans after media outlets started reporting on the suspected fraudulent activity at Optimus.

“The government ministries that are in charge of the agencies will conduct primary probes,” a senior presidential aide said Friday.

Reports were also made that Interior Minister Chin Young was an investor at Optimus. According to the Ministry of Interior and Safety, Chin, his wife and son invested a total of 500 million won in Optimus funds in February. Chin said NH Investment and Securities, which he has used for asset management in the past, recommended the products, and that he also suffered a large loss.

Optimus had solicited funds on the promise of high-yield returns despite mainly investing in state-run companies. Instead, it invested heavily in high-risk projects, such as private real estate firms and lenders, while offering fabricated reports to the investors.