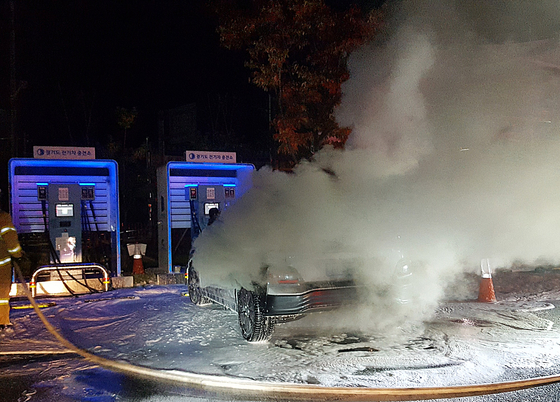 A Kona EV smolders after a fire at a parking lot in Namyangju, Gyeonggi on Oct. 17. [YONHAP]


A Kona Electric caught fire on Oct. 17 while connected to a charger, a day after Hyundai Motor initiated a voluntary recall of the electric vehicle (EV) in Korea, the company's most popular electric model.

More than a dozen Kona EVs have gone up in flames over the past 18 months.

In the latest incident, a 2018 Kona Electric caught fire in a parking lot in Namyangju, Gyeonggi, while connected to a rapid charger early Saturday morning and was left a smoldering wreck.

“It seems the vehicle caught fire while being charged,” said an official from the local fire station.

Kona Electric is the best-selling EV from Hyundai Motor and the second most popular in Korea, after Tesla’s Model 3.

Before the Oct. 17 case, 13 fires involving Kona Electrics were reported in and outside Korea, the most recent in Daegu on Oct. 4. Of the 13 cases, nine were in Korea, two in Canada and two in Europe.

Hyundai Motor is expected to begin the recall in the United States on Dec. 11, according to National Highway Traffic Safety Administration (Nhtsa). It said Hyundai Motor will update the Battery Management System, which monitors and manages the state of the battery, and replace the lithium-ion cells if necessary.

Owners will be advised to park their cars outside and away from structures until the repair is complete, according to the NHTSA.
In the United States, 6,707 units built between August 2018 and March 2020 are affected.

Hyundai Motor plans to start the recall in Canada of more than 4,375 Kona EVs as well as 37,000 units in Europe and 3,000 more in other countries including India.

The cause of the fires hasn't been confirmed yet. The country's Transport Ministry suspects a defect in the battery cells, citing an investigation by the institute Korea Automobile Testing & Research Institute. LG Chem, which supplied the batteries, says no cause has been determined and that fires did not occur during tests simulating similar conditions.

Its investigation office received two reports of 2018 and 2019 Bolt EVs catching fire under the rear seat. The office then found a similar case involving a 2017 model. Some 77,842 Chevrolet Bolt EVs will be the subject of investigation.