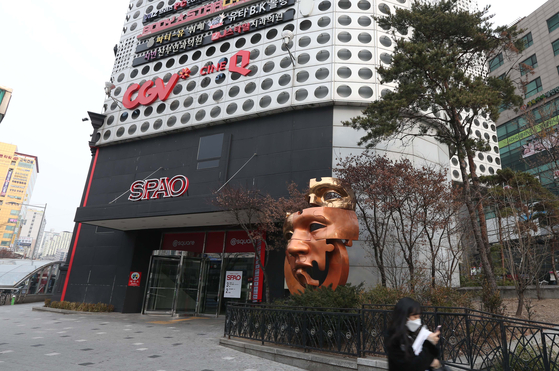 A branch of CGV in Seoul. The nation's biggest movie theater chain said it would raise ticket prices starting on Oct. 26, in a bid to pull up revenue hit by the Covid-19 pandemic. [JOONGANG ILBO]


With the film industry hit hard by the Covid-19 pandemic, Korea's largest movie theater chain CGV will raise ticket prices by up to 2,000 won ($1.75) in a bid to pull up its revenues.

According to a CGV statement on Sunday, starting Oct. 26, ticket prices for the chain's ordinary 2-D theaters on weekdays will rise to 12,000 won and those on weekends (Friday to Sunday) will increase to 13,000 won. The current seat grades of economy, standard and prime, which depend on their distances from the screen, will be abolished, while the 1,000-won discount for the two rows closest to the screen, which are currently economy seats, will remain. This means that prices for the current economy and standard seats are rising by 2,000 won and that for the current prime seat will increase by 1,000 won. The ticket prices for 4DX and IMAX theaters will also rise by 1,000 won.

"Our spending on rent, management and paying employees has grown each year, while our sales have dropped sharply due to the Covid-19 pandemic, which also burden us with the extra costs of disinfection measures," CGV said in a statement. The company saw a 202.1-billion-won operating loss in the first half of this year.

According to the Ministry of Culture, Sports and Tourism, the number of moviegoers and ticket sales this year through September tumbled by 70 percent over a year earlier to 48 million viewers and 415.1 billion won due to the pandemic.