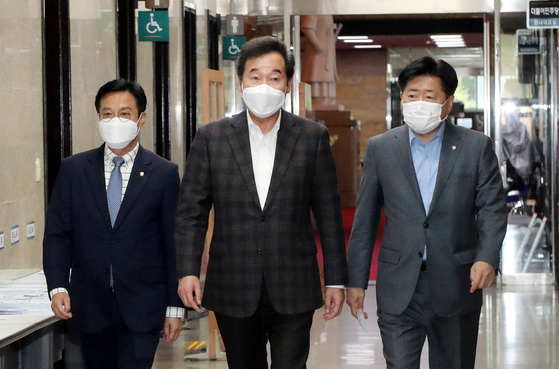 “The meeting [at the National Assembly in Seoul] was arranged at the request of Kawamura’s office,” a member of the DP told the JoongAng Ilbo on Sunday morning. “We expect the two to hold an open-minded conversation about the issues of late in bilateral relations.”

Kawamura, a 10-term lower house lawmaker with close personal ties to former Prime Minister Shinzo Abe and current Prime Minister Yoshihide Suga, is visiting Korea from Sunday to Wednesday. He and Lee are said to have had close ties since Lee was a reporter based in Tokyo 30 years ago.

Although the DP member told the JoongAng Ilbo that “no specific topic has been set on the agenda for the talks,” topics discussed could have included bilateral cooperation on Covid-19 and one of the most contentious issues between Korea and Japan, the forced labor issue. 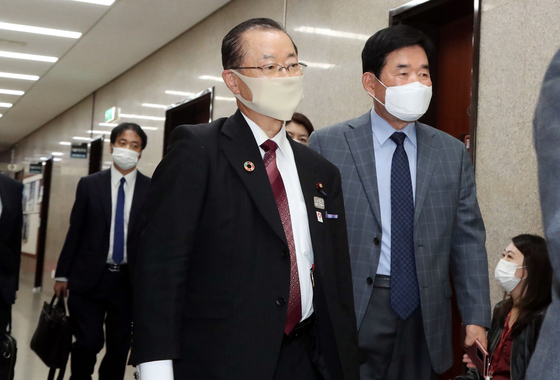 Kawamura on his way to meet with Lee at the Assembly on Sunday. [YONHAP]

The Korean Supreme Court made a landmark ruling on Oct. 30, 2018, ordering Nippon Steel & Sumitomo Metal, renamed Nippon Steel last year, to pay 100 million won ($82,000) each to Korean victims of Japanese forced labor during World War II. It made a similar ruling on Nov. 29, 2018, against Mitsubishi Heavy Industries. The top court acknowledged the illegality of Japan’s 1910-45 colonial rule of Korea and recognized that the individual’s right to compensation has not expired.

The Japanese companies have refused to comply and plaintiffs began the legal process of seizing their assets in Korea. Tokyo maintains that all compensation issues related to colonial rule were resolved through a 1965 treaty normalizing bilateral relations.

The Korean government has maintained it would not intervene in a ruling made by the country’s independent judiciary.

The ruling led to trade disputes between the two nations, after Tokyo imposed a series of restrictions on key industrial materials to Korea in July 2019, followed by its removal of Korea from its so-called white list of countries given preferential treatment in exports.

More recently, Tokyo informed Seoul that Prime Minister Suga will not be attending a trilateral summit hosted by Korea this year unless the Korean government moves to resolve the forced labor issue, according to multiple Japanese media outlets including Kyodo News last week.

The Blue House issued a statement through spokesman Kang Min-seok last week, who said that “there is not much room [for a solution] if Japan puts forward such a condition,” adding that the Korean government will try its best to host the meeting successfully.

Sunday’s meeting will not be the first in Seoul between Lee and Kawamura. Kawamura called on Lee in Seoul in August 2019 when the two discussed the forced labor issue, according to Kawamura’s discussions with the press afterwards.

In the meeting Sunday, Lee may also have relayed the Korean government’s desire for support from Japan for the candidacy of Trade Minister Yoo Myung-hee as director-general of the World Trade Organization.

Meanwhile, the Ministry of Foreign Affairs of Korea issued a statement on Saturday over Prime Minister Suga’s sending of a ritual offering to the Yasukuni Shrine in Tokyo earlier in the day to commemorate the country’s autumn festival. It was the first time that Suga sent an offering to the shrine since he took office in September, after Abe resigned over health issues.

The Yasukuni Shrine is controversial because it honors Japan’s war dead, including 14 Class-A war criminals, and is considered a symbol of the country’s militarism.

Abe visited the shrine last month, four days after his resignation. It was his first visit since 2013. He had sent offerings in the interim years.