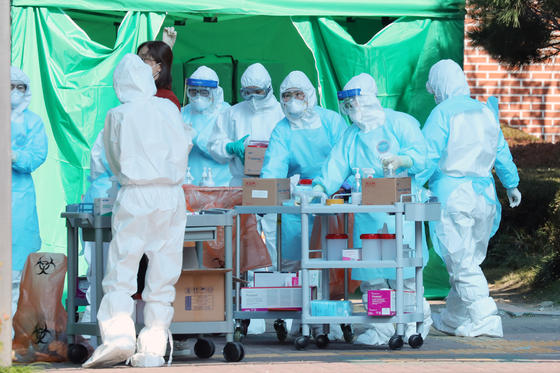 Hospital staff members at SRC Hospital in Gwangju, Gyeonggi, on Sunday. After a staff member tested positive at the hospital, it has given way to 50 additional cases as of Sunday. [NEWS1]

After a staff member tested positive at SRC Hospital in Gwangju, Gyeonggi, a rehabilitation and treatment center, on Friday, an additional 50 people tested positive at the hospital as of Sunday at noon, according to Korea Disease Control and Prevention Agency (KDCA). Of them, 20 are medical staff, 18 are patients and 10 are relatives.

Another cluster was recorded at a nursing home in Busan, which recorded its first case on Tuesday. It has 73 cases as of Saturday, according to the Busan city government.

At another rehabilitation center, Master Plus Hospital, in Uijeongbu, Gyeonggi, 66 people have tested positive since its first case on Oct. 6, according to the KDCA.

"These clusters arising out of rehabilitation hospitals and nursing homes are very worrying because the virus can spread silently yet rapidly among elderly patients," Kwon Joon-wook, deputy director of the KDCA said in a press briefing at the agency's headquarters in North Chungcheong on Saturday. "It is highly imperative that any care giver at these centers and clinics maintain the highest level of sanitation and be tested immediately if any of them feel ill or show symptoms of infection." 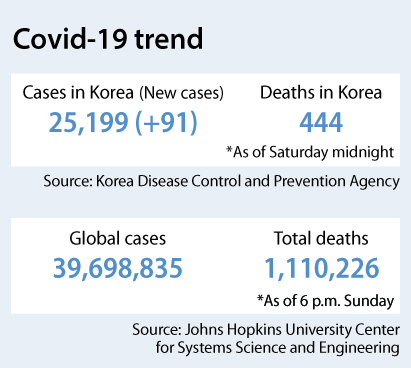 Other clusters being watched by the quarantine authorities include one related to a bar in Incheon, which has led to 16 cases total as of Sunday at noon, and a medical equipment company in Songpa District, southern Seoul, which has given way to 33 cases total, including 17 workers at a call center in Gangnam District, southern Seoul, as of Sunday at noon. According to the KDCA, a person who visited the equipment company's office earlier this month was infected and spread the virus to a relative of a worker at the call center.

Korea’s daily Covid-19 infections went into the triple digits in mid-August when Korea experienced a second wave of cases stemming largely from the Aug. 15 National Liberation Day rally in central Seoul, where thousands are said to have taken part, and protestant Sarang Jeil Church in central Seoul, many of whose members took part in the rally.

The daily infection count peaked at 441 on Aug. 26, then stabilized in the double digits by late September.

The Ministry of Education announced on Oct. 11 that schools will be allowed to have more students in classrooms starting Monday. The ministry gave schools a week to make changes to their class schedules.

When social distancing standards were at Level 2, kindergartens, elementary and middle schools in Korea were allowed to have a third of the class present at a time.

Starting Monday, up to two-thirds of a class will be allowed.

High schools were allowed to have up to two-thirds of the class present even during the Level 2 social distancing recommendation. No changes will be made to them, the ministry said.

The ministry has left it to district education offices to decide how best to meet the directive but also to make sure that all students receive due academic attention, especially the younger grades. Some schools have opted to divide the student body into two groups, with one group to be present in morning hours and the other in afternoon hours.

The Seoul Metropolitan Office of Education said it will be making arrangements to ensure all first graders in Seoul can go to school every day, and that the rest of the grades in elementary schools will go to school two to four days a week.

Similar arrangements will be made in middle schools so that seventh graders will be able to be in class every day.

The education office in Gyeonggi said it will be arranging class schedules so that the first and second grades in elementary schools will go to school every day, or at least four days a week.

The education office in Incheon said that first graders will go to school every day, whilst seventh graders will be in class three times a week.

Among Korea’s 91 cases Saturday, 71 were domestic and 20 imported. Of the domestic cases, 48 were based in Gyeonggi, 18 in Seoul, two in Busan and one each in Incheon, Daejeon and Gangwon. 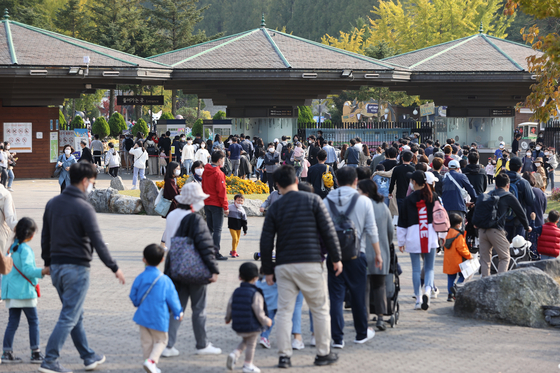 Why the vaccine delay?