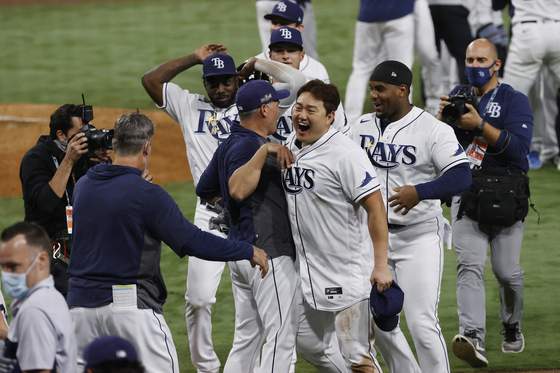 Choi Ji-man of the Tampa Bay Rays, front, celebrates with his teammates for their advancement onto the World Series after picking up a 4-2 victory against the Houston Astros at PetCo Park in San Diego, California on Saturday. [EPA/YONHAP]


Korean slugger Choi Ji-man is expected to become the fourth Korean ever and the first Korean batter to play in the World Series, as the Tampa Bay Rays defeated the Houston Astros 4-2 in Game 7 of the American League Championship Series (ALCS) at PetCo Park in San Diego on Saturday.

It took the Rays until the very last game, but the team finally managed to earn their World Series spot.

Having won the first three games of the ALCS against the Astros, it seemed as if the Rays were going to easily make their way into the World Series, as they only needed to win one more game while the Astros needed to take four straight games.

Despite the expectations, the Astros achieved an upset by winning Games 4, 5 and 6. As the Astros quickly tied the series with three straight wins, it came down to Game 7, the very last of the best-of-seven series.

Choi, who was assigned as a first baseman and fifth batter in the lineup, once again met expectations. With three at-bats, Choi was given a walk, two hits and a run to help his club pick up a 4-2 victory.

With Zunino’s sacrifice fly at the bottom of the sixth, Choi made it to home and added another run to extend the lead 4-0. The Astros made an attempt to catch up to the Rays with Carlos Correa’s two-run single, but fell short.

Choi made some crucial catches at first.

Choi follows in the footsteps of Ryu Hyun-jin of the Toronto Blue Jays, who in 2018 became the only Korean ever to start in a World Series game, at the time playing for the Dodgers. Korean pitching legend Park Chan-ho appeared in the 2009 World Series for the Philadelphia Phillies, but both the Phillies in 2009 and the Dodgers in 2018 went on to lose the series.

Kim Byung-hyun, then of the Arizona Diamondbacks, was the first Korean to play in the World Series, in 2001. He is also the only to play for a team that won the title.

Kim went on to pick up a second World Series win with the Boston Red Sox in 2004, although he didn’t actually play.

As all three players were pitchers, Choi is likely to be the very first Korean batter in major league World Series history to appear. If he doesn’t make an appearance, Choi already made history as Korea’s first batter.

Looking at Choi’s performance in the postseason, it wasn’t until Game 5 of ALCS that he started to leave an impression. Before that, Choi struggled at bat. But as his home run in Game 5 was a game-tying single homer, it was good enough for the 29-year-old to cement his spot in the lineup.

During Game 5 of the ALCS, Choi hit a home run, becoming the very first Korean batter to hit a home run during an ALCS game. Choi hit a solo home run in the eighth inning to tie the game 3-3, but the Rays still lost 4-3.

Although Choi was substituted into the game as a pinch hitter in Game 6 and was struck out, he made sure to fulfill his role in Game 7 with his performance both on offense and defense.

With four wins and three losses, the Rays will now be playing for the World Series title against the winner of the National League Championship Series (NLCS), which will be either the Los Angeles Dodgers or the Atlanta Braves. As the Dodgers won Game 6 against the Braves 3-1, the two teams will also be playing in Game 7, which will be played at 9:15 a.m., on Monday morning, Korea time.

The Rays will now be heading to the Globe Life Field in Arlington, Texas, to play Game 1 of the World Series, scheduled for Tuesday starting at 7 p.m., local time, or 9 a.m. in Korea on Wednesday.