E-commerce market in shock as duo discuss a tie-up

E-commerce market in shock as duo discuss a tie-up 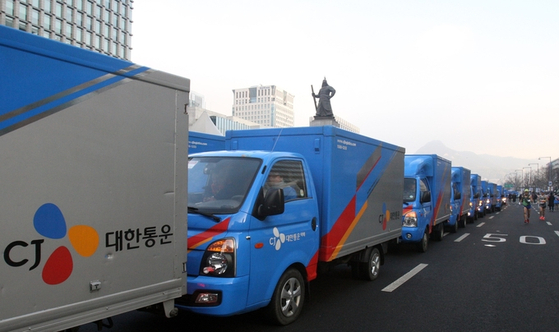 Naver is in talks to form a partnership with CJ Logistics for business synergy between their platform and fulfillment services. [CJ LOGISTICS]


Coupang has bigger problems now than just reporting massive losses. A competitor is being formed that could shake up the e-commerce business and threaten its position in the market.

Naver and CJ Logistics have disclosed that they are in discussions to create a broad partnership, which could include stock swaps and the merger of key business units: Naver’s shopping platform and the distribution network of CJ Logistics. The combination could the fill biggest hole in Naver’s business, the lack of its own distribution center.

Other e-commerce players threatened by the tie-up include Coupang, Tmon and 11st.

CJ Logistics, which operates packaging, delivery and management services, leads the fulfillment industry. In 2018, it invested 380 billion won ($333 million) in the construction of a fulfillment center at Gonjiam of Gyeonggi that is the size of 16 soccer fields.

According to mobile app analytics company WiseApp, Naver’s turnover in 2019 was 20.9 trillion won.

Naver’s transaction volume is bigger than Coupang’s, which came in at 17.8 trillion won, and eBay Korea’s, at 17 trillion won. The business is six times as big as SSG.com’s, at 3.6 trillion in turnover. But since Naver does not own a distribution center, the sellers on the platform have to take care of packaging and delivery on their own, often creating problems with delays, losses and refunds.

“The strategic partnership between Naver and CJ is a win-win strategy for both companies, since Naver can save on investment costs for distribution and CJ Logistics has acquired the biggest customer base in the country,” said Kim Min-jung, an analyst at Hi Investment & Securities.

Some industry analysts also project that Naver may become a major player in Live Commerce through collaboration with CJ ENM and Studio Dragon, a production company under CJ ENM. Live Commerce, which is similar to TV home shopping but broadcasts live online, is seen as a major opportunity for IT companies. According to eBest Investment & Securities research, the local market for live commerce is around 3 trillion won and is projected to grow to 8 trillion won by 2023.

Major offline distribution companies like Lotte and Shinsegae are also scrambling to secure their positions in the e-commerce industry. SSG.com, Shinsegae’s e-commerce site, has been accepting applications from business owners for its transition into an open online marketplace, where customers can buy and sell on the platform. Profits are earned via commissions from businesses and advertisements. Coupang, Gmarket and 11st utilize the open commerce system.

The biggest reason major distribution companies are jumping into the open market business is to gain a competitive edge. As opposed to shopping malls, where customers buy a limited range of products, a wider spectrum of products are available in the open-market business.

“Boundaries have been blurred in e-commerce in terms of selling styles, ranging from direct buying to open market. SSG.com will focus on bolstering product strength by lowering the barrier of entry for businesses to enter the online marketplace,” said a spokesperson for SSG.com.

SSG.com, which sells products from Emart and Shinsegae Department Store as well as goods selected and bought by the company’s merchandisers, currently handles around 10 million products. From 10 to 30 times more items are available on Coupang and Gmarket. Lotte Shopping’s online shopping mall On has 75 million products as an open-market business.

“Right now, no one can determine who will come out as the winner out of this competitive e-commerce market,” said Cho Yong-sun, an analyst at SK Securities.