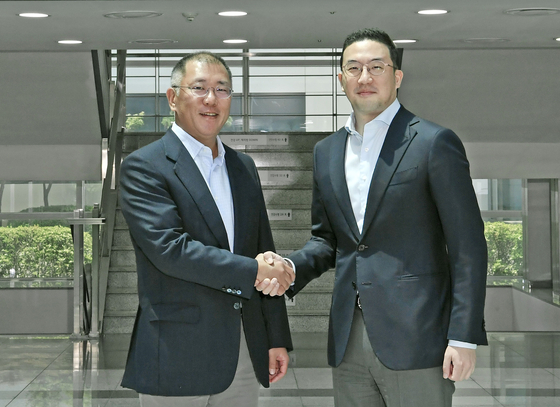 Hyundai Motor Group and LG Chem will collaborate on a system to recycle used electric vehicle (EV) batteries under regulatory approval granted by the Ministry of Trade, Industry and Energy on Monday.

With the rise of EVs, one big issue is what to do with batteries after they have outlived their usefulness in a vehicle. One ambitious idea is to use them in energy storage systems (ESS), which store power from sources such as solar panels or wind turbines for consumption later. They generally use a large number of batteries connected together.

EV taxis rack up more miles than ordinary vehicles, making it necessary for changes of batteries within two to three years. This is why a taxi company is a good partner for such a project.

After two to three years of use in an EV taxi, a worn out battery will be sent to LG Chem, which will test to see if it’s fit for recycling in an ESS used in a charging station for EVs.

“The ultimate goal of this model is to ensure that the life span of EV batteries become a virtuous cycle where rented batteries are reused later in charger ESS,” the ministry said in a statement.

The project was approved as one of three "regulatory sandboxes" announced by the ministry on Monday regarding recycling of used EV batteries. A regulatory sandbox allows new businesses or technologies to be exempted from related regulations for a minimum of two years to encourage innovation.

Under domestic law, used EV batteries in Korea are collected by local governments. A lack of regulation on the recycling of used batteries has resulted in them stacking up inside government storage areas.

The state-run Korea Energy Economics Institute forecasts there will be more than 80,000 EV batteries discarded by 2029.

For Hyundai and LG, the partnership allows them to join forces in the field of Battery as a Service — which refers to a business model that offers battery-related services like repairs, recycles and rentals.

It comes as Hyundai Motor awaits investigation results for spontaneous fires in its Kona Electric EVs, the company's most popular electric model. More than a dozen Kona EVs have gone up in flames over the past 18 months.

LG Chem supplies the batteries to that model. Sources from both companies said the fires will not affect relations between the top carmaker and battery supplier.

Executives of Hyundai and LG may meet to sign a memorandum of agreement later this month for the recycling project, according to local reports.

“At the moment, we’re in need of a track record for products made from recycled EVs in order to establish quality and safety standards,” the Trade Ministry said in a Monday statement.

“Disposed EV batteries can cause environmental problems, but they can also be part of a business model if they’re recycled in the right way. We’re expecting the projects to set safety and quality standards as well as verifying the economic value of used batteries.”