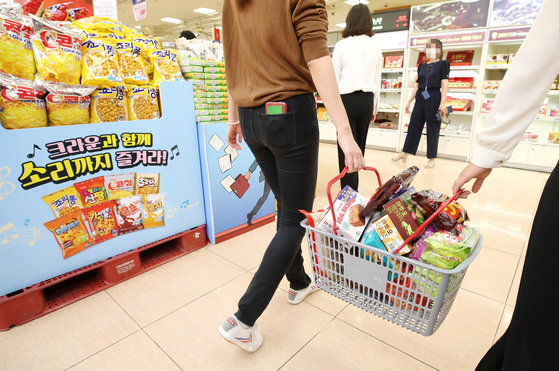 Customers shop snacks at a big supermarket in central Seoul on Sept. 8. [YONHAP]

Don’t want to get out of your office chair every time you have a hankering for a Choco Pie, or some other confectionery delight? Don’t feel like getting off the couch when you want to buy a salty snack? Now you don’t have to.

There’s an online service for that. Actually, quite a few.

Orion in May introduced an online-only snack service called “Orion # I need snacks.” The series offers three types of themed-snack packages: “Our snacks,” which includes the company’s best-selling snacks, such as Choco Pie and My Gummy; “I need chocolates,” which includes its chocolate-flavored snacks, such as Choco Songi and Choco Chip cookies; and “I need something to munch on,” with Poca chips, Kkobuk chips and squid-flavored peanut balls.

Orion’s online-only snack series ’Orion # I need snacks“ that was launched in May. [ORION]

In just a month since the program’s introduction, around 25,000 orders were filled. A total of 85,000 packages were sold as of Oct. 18, and sales rose by 9 percent in September compared to a month earlier ahead of the Chuseok harvest festival.

Orion’s limited edition Halloween packaging for snacks that was launched on Oct. 15. [ORION]

The company on Oct. 15 added a “Halloween pack” to the series ahead of Halloween on Oct. 31.

Orion also introduced a large-sized pack of Miz Black, a cocoa-flavored cookie. The 36-gram (12.7-ounce) packs sold out shortly after being introduced in the market in September. 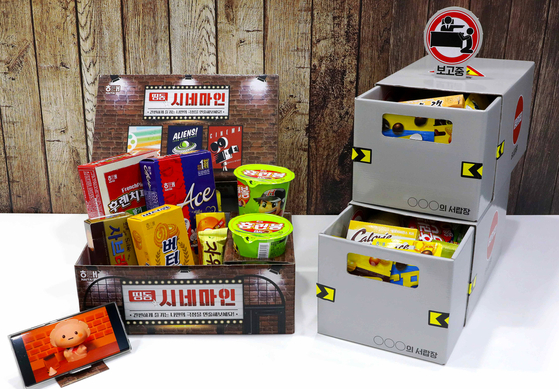 The Office Worker’s Drawer includes eight types of snacks that are most popular among people in their 20s and 30s, such as the Free Time chocolate bar, Calorie Balance bar and Yanggaeng sweet red bean jelly.

Ddingdong Cinemine includes eight different snacks, such as Home Run Balls and Ace Crackers, targeting people who enjoy watching movies at home, as well as a smartphone holder that is made of paper. Roughly 9,000 packages sold out in a week.

The both packages are priced at around 15,000 won and are currently available through e-commerce sites such as Coupang and Gmarket. With their huge popularity, Haitai Confectionery and Foods said it plans to expand its “drawer” series by launching additional packages targeting people who are on a diet and students who are currently preparing for college entrance exams.

Lotte Confectionery is also in the snack-service game.

Lotte Confectionery’s “Monthly Snack” service is one of the hottest trends in the confectionery industry. It costs 9,900 won per month, and customers are asked to commit to a three-month subscription for 29,700 won. Consumers are not aware of what snacks are in the box until the package is delivered to their doorstep. About 200 boxes sold out in three hours since it was first made available in June. 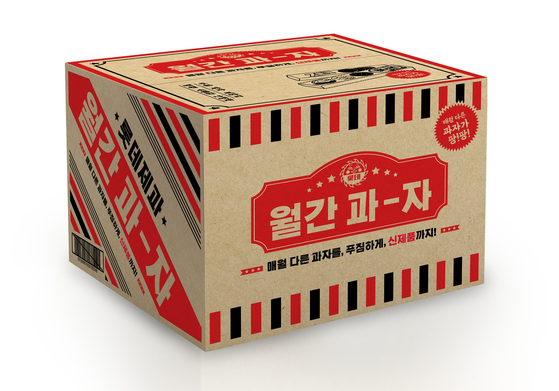 Lotte Confectionery recently added two more options — a “Sohwakhaeng” package for 9,900 won and a “Mania” pack for 19,800 won — in the lineup. Customers can make a reservation in advance, and about 500 people did so in six days.

“Amid the prolonged Covid-19 pandemic, the online sales of snacks spiked more than tenfold,” a spokesperson for Haitai Confectionery and Foods said. “Companies are newly coming up with many different ideas for snack packages as snacks are now gaining popularity as fun and tasty gifts that people can get at a relatively low price of between 10,000 won and 20,000 won.”