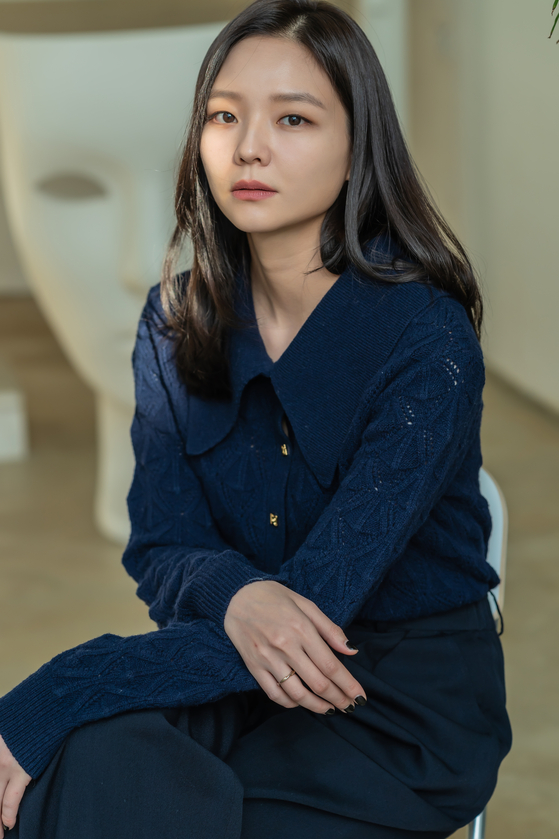 
After watching the film “Samjin Company English Class” it would seem that the three actors — Go Ah-sung, Esom and Park Hae-soo — were perfectly suited for each of their characters Ja-young, Yu-na and Bo-ram.

But during a press interview at a cafe in Samcheong-dong, central Seoul, last week, Esom revealed that she was initially attracted to the character of Bo-ram.

“Bo-ram’s character was so cute, and I loved that she was so professional in her field of mathematics, and I loved how her character built [over the story],” she said. “Something that [I thought] Yu-na lacked.

“You know, it’s like the saying the grass is greener on the other side of the fence. But after the film was finished, I felt good [about Yu-na] and thought I was most adequate for the role.”

“Samjin Company English Class,” slated to hit the theaters Tuesday, revolves around the three underrated heroines' attempt to reveal and resolve a massive corruption scandal at their company, Samjin, in the year 1995. 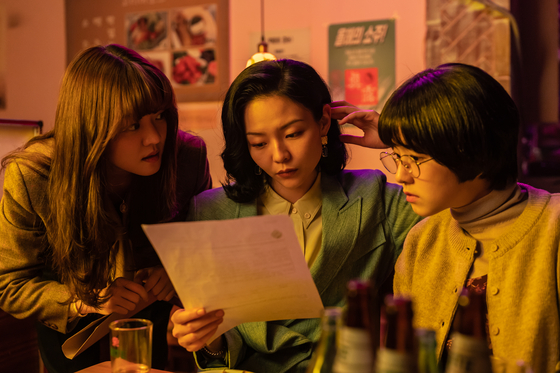 From left, actors Go Ah-sung, Esom and Park Hae-soo as Ja-young, Yu-na and Bo-ram on a mission to resolve the massive corruption scandal of their company Samjin. [LOTTE ENTERTAINMENT]


There are many words to describe Yu-na: First of all, she is the "tall friend" among the trio. She is a know-it-all, and she doesn’t hide it: She is always briefing her friends on knowledge that she’s acquired. Some might say she’s down-to-earth or practical, but leans toward being pessimistic when it comes to the numerous obstacles that the trio has to overcome in order to fight against the corrupted heads of the company.

“When I read the script, I tried to understand [from Yu-na’s point of view] why she was like that [pessimistic],” Esom said. “Then I came to find that she wanted to be appreciated, recognized, and I asked the director to input that desire into Yu-na. Then she became so friendly to me, [like] how she acts all tough and objective in front of her friends but doesn’t say a word to her bosses. 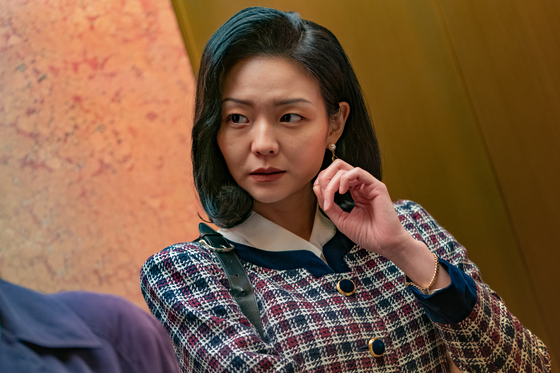 Yu-na may be pessimistic and cold-hearted on the outside, but she is a friend that her friends could always count on. [LOTTE ENTERTAINMENT]


“Although she seems like a tough, confident person on the outside — someone who speaks her mind when she wants to — I tried to focus on her sentimental side in every scene,” she said. “[Those efforts] may only be known by me, but that’s how I created Yu-na and she became the person she is [in the story].”

The actor said that she even made up a song in which Yu-na sings for Ja-young in one of the scenes. Unfortunately, the scene didn't make it to the final movie.

“There is a scene where Ja-young thanks Yu-na [for helping her] and apologizes for getting them into this mess,” the actor said. “Yu-na tells her that it’s okay, she didn’t do it for Ja-young but for herself — she feels better for doing this and then she sings a song for her, which portrays how Yu-na feels. I prepared the melody and the lyrics and filmed it in two versions, but sadly, that wasn’t shown in the film.” 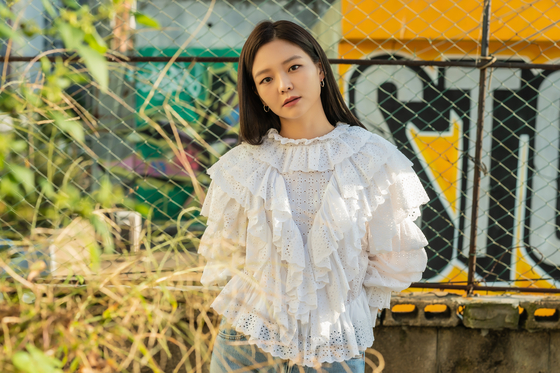 
The actor certainly seemed like she did her homework — and thoroughly. Esom said that she was especially determined to exceed expectations because it was one of those rare opportunities where she got to work together with fellow actors around her own age.

“The set didn’t feel complete if one of us was missing,” she said. “All of the scenes of us three together are important, but my favorite scene is in the beginning, where after each of us are introduced, we all come rushing out of the subway on our commute and Bo-ram trips and falls, but Ja-young and Yu-na immediately pull her up by the arms and take care of her. That felt like it really showed how close they were.”

Another attraction of the film — and what caught the attention of the model-turned-actor — is the retro wardrobe the girls flaunt throughout.

“I had such a blast preparing [for the fashion],” Esom said. “There were an abundance of data of the 90s, so that helped, and I also took reference from photos of my mother’s youth. There weren’t a lot, but still, they were very cool. The fashion and make-up back then was so stylish and even more daring than today.”

One particular look the actor is particularly affectionate about is when she replicated the exact outfit that her mother had worn in one of the photos she used as a reference.

“There is a scene where the employees gather together at a pub and I wear a black turtleneck, gold necklace and leather skirt,” she said. “That’s what my mother wore in one of the photos I saw, and I asked the costume team if I could wear something like that. But she [my mom] doesn’t know this yet, I think. I think she scans through the articles, so she may know then, but I was somewhat embarrassed to tell her.”

When asked if she had thought about what Yu-na would do next after the film ended, the actor said that it's likely she would have started her own company. 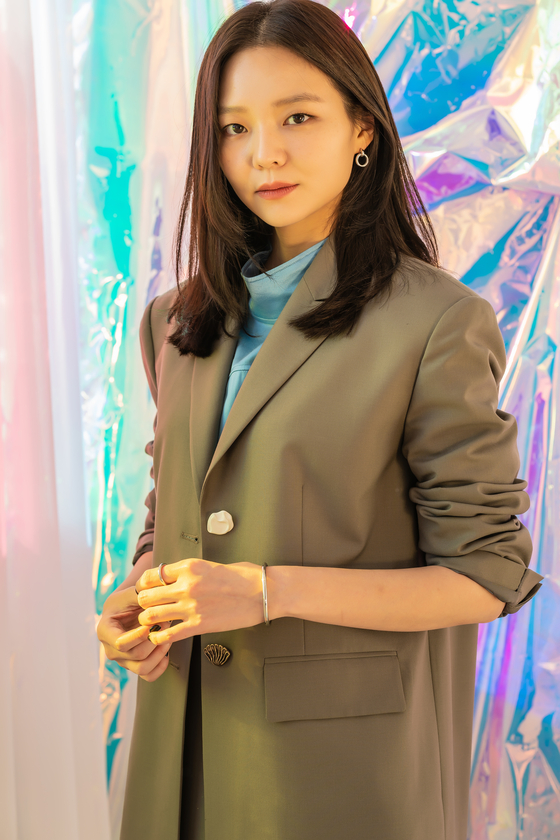 
“I think her talents are too big that it would be a waste for her to work under someone else,” she said. “I think Yu-na would have eventually started her own.”

Despite the retro setting, what the youth have to deal with in the story somewhat mirrors the hardships that the youth in this generation go through today — confusion about what they want to do and where their dreams or purposes lie.

“I don’t think I live with a specific purpose of what I want to do,” the actor said. “And I think that won’t change as I get older. But I think that I do things that I’ve thought about and I really wanted to do, so I think it's the thought that counts.”

Esom’s most recent roles portray her as a cool, confident woman — and while the actor stresses that each character is different, she says that she would like to try something opposite for her future roles. 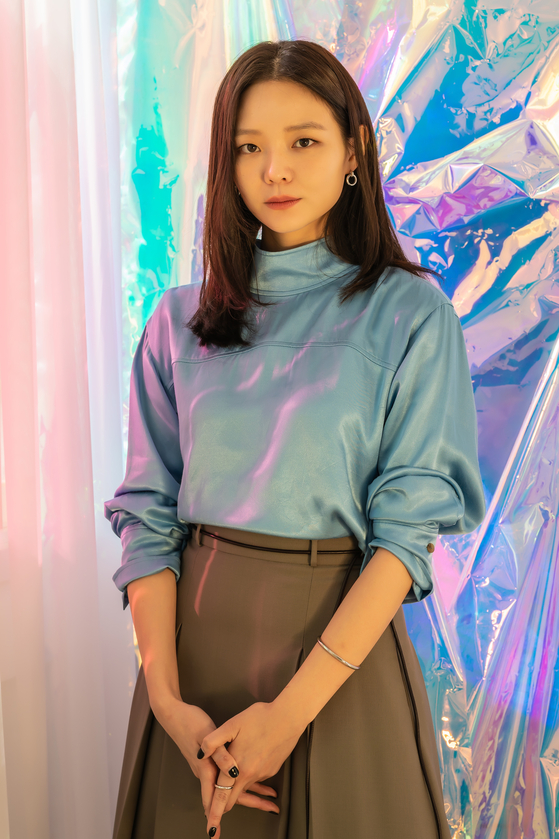 
As for now though, the actor seemed to be pretty content with how Yu-na overcame her own challenges.

“One of my favorite lines from Yu-na is that [in the English class], she introduces herself with ‘I love myself,’” she said. “When you come to think of it, I don’t think there’s anything more important than that. So I’m going to love myself — not narcissistically — but more than I did before from now on.”