Americans more smitten with South Korea than ever

Americans more smitten with South Korea than ever 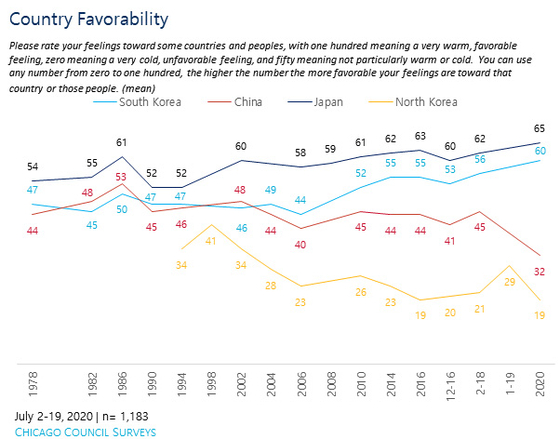 South Korea’s reputation reached an all-time high in the United States because of its K-pop bands, global influence and Covid-19 response, according to the latest survey by the Chicago Council on Global Affairs (CCGA).

Americans gave South Korea’s favorability rating a mean score of 60 out of 100, the highest ever, according to the 2020 Chicago Council report released Monday, despite U.S. President Donald Trump’s skepticism of alliances.

The survey, “Americans positive on South Korea despite Trump’s views on alliance,” was conducted from July 2 to 19 through a nationwide online research panel on 2,111 U.S. adults 18 years or over, with the support of the Korea Foundation.

“The Trump presidency has strained relations with several Asian allies, including South Korea,” wrote Karl Friedhoff, a fellow in public opinion and Asia policy at the Chicago Council who led the survey, in the report. “But the 2020 Chicago Council Survey results show that President Trump’s repeated threats and bullying tactics on defense and trade issues with Seoul have done little to soften support among the American public for the alliance with South Korea.”

The report notes, “Over the past year, South Korea has experienced an unprecedented boom in awareness of its cultural products and global influence.”

This includes K-pop acts such as BTS and Blackpink regularly being featured on the Billboard charts and selling out arenas around the United States and Korean film "Parasite" becoming the first foreign film to win Best Picture at the Academy Awards. Likewise, Netflix has made Korean television shows more accessible in U.S. homes than ever before.

The report said that South Korea’s handling of Covid-19 “has won plaudits from the international community, laying out a playbook for other countries in how to deal with outbreaks.”

According to the survey, 47 percent responded that South Korea’s handling of the coronavirus pandemic has either been very effective, or somewhat effective. This compares to 37 percent for the United States and for China.

But 73 percent of respondents said South Korea should either be more involved, or as involved as now, in addressing the world’s problems.

A record high of 68 percent of respondents said that South Korea practices fair trade with the United States, up from 53 percent when this question was last asked in 2017 and from 49 percent when it was first asked in 2004.

On the alliance, a majority of respondents, or 58 percent, favored U.S. troops defending South Korea if it is invaded by the North, the same as last year.

Seoul and Washington have struggled to renew a defense cost-sharing deal amid the Trump administration’s calls for South Korea to pay a much higher contribution.

Some 52 percent of Americans surveyed said that alliances in East Asia benefit both countries and 7 percent said they mostly benefit the United States.

Likewise, 77 percent said they want to continue prioritizing building up strong relations with traditional allies like South Korea and Japan, even if this diminishes relations with China.

Nearly three-quarters of Americans, or 74 percent, said that the United States and South Korea are mostly partners, up from 65 percent when the question was first asked in 2012.

In contrast, North Korea’s country favorability dropped to 19 out of a score of 100 this year, compared to 29 in 2019 — the lowest out of any country included in the survey.

Around 14 percent of respondents thought that denuclearization negotiations will lead to North Korea giving up its nuclear weapons.

Just over half of respondents, or 51 percent, said North Korea’s nuclear program was a critical threat to the United States, which was an all-time low.

Thaad fallout needs to serve as a “wakeup call” for Seoul: Daalder